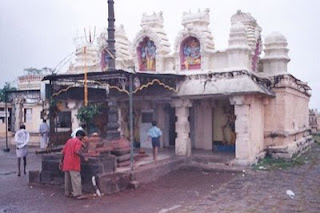 Location : The hills are in the Yelandur and Kollegal Taluks of Chamarajanagar District of Karnataka. The hills are contiguos with the Satyamangalam range southwards, in the Erode District of Tamil Nadu. The hills that give the range its name are situated 90 km from Mysore and 220 km from Bangalore.

Importance of the Hills : The BR hills links the Eastern Ghats and the Western Ghats allowing animals to move between them and facilitating gene flow between populations of species in these areas. Thus, this forms Biligirirangaswamy sanctuary which serves as an important biological bridge for the biota of the entire Deccan plateau.

Description : The BR hills are famous for the temple of Lord Ranganatha or Lord Venkatesha which is situated on the highest peak of the hill range, on the 'white cliff' which gives the hill its name.

The local form of the deity is called Biligiriranga and is depicted in a unique standing position. This is the only place in the country where it is depicted as being in this position. Devotees flock to the place in large numbers to catch a glimpse of the deity. The local tribes present a large pair of sleepers measuring 1 foot and 9 inches, made up of skin, to the Ranganathaswamy once in two years.

Festivals : The Annual Car festival of the deity held during “Vaishakha “in the month of April, is famous in the region and attracts thousands of pilgrims from far and wide., the ratha festival is celebrated at Biligiriranga Hills.
Posted by Rajesh. CTR at 7:54:00 PM