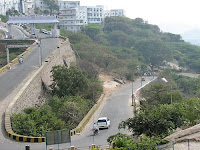 Location : Yadagirigutta lies near Bhuvanagiri ( Bhongir). It is one of the important holy places of Nalgonda District, Andhra Pradesh. Yadagirigutta is famous for the Lakshmi Narasimha Swamy Temple.

Legend : In Tretayugam, there lived a sage by the name of Yadarishi, son of the great sage Rishyasrunga and Santa Devi who did penance inside a cave with the blessings of Anjaneya on this hill between Bhongir(Bhuvanagiri) and Raigiri (Now in Nalgonda district of Andhra Pradesh,India). Pleased with his deep devotion, Lord Narasimha, an incarnation of Lord Vishnu appeared before him in five different forms as Jwala, Yogananda, Gandabherunda, Ugra and Lakshminarasimha. They later manifested themselves into finely sculpted forms that later came to be worshipped as Pancha Narasimha Kshetram.

There are Puranic and traditional accounts of this Shrine, which are widely popular among the devotees. There is mention about the origin of this temple in the Skanda Purana, one of the famous 18 puranas.

Within the cave shrine, carved out of the living rock as are all the images, is the Jwala Narasimha, the Flame or Fire form which is difficult to see.

Description : Glowing bright atop the sikharam of garbha griha(Sanctum sanctorum) of this cave temple is the golden Sudarshana chakra (about 3 ft x 3ft) of Lord Vishnu (whose reincarnation is Lord Narasimha) the adornment as well as the weapon is a symbol this temple is identified by from as far away as 6 km. It is said that many years ago the chakra moved in the direction from which the devotees came as if like a compass guiding them towards itself.

Lord Narasimha is believed to have been worshipped by sages (rushis). The region of Yadagirigutta is reputed to be a "Rushi Aradhana Kshetram" or the place of worship for sages .

As the belief goes, Lord Narasimha has taken on the role of a "doctor" and is known as "Vaidya Narasimha" by his devotees at this shrine to cure many chronic diseases and the role of a 'do gooder' to those who are under the influence of bad planets, witch craft and black magic. Many instances are cited of the Lord appearing in the dreams of the devotees, and administering medicines and operated the patients and blessed them with good health. Many devotees tell of vivid dreams in which the Lord comes to heal them from chronic or terminal illnesses, and even mental or emotional problems. A mandala (40 day) pradakshina is very popular made by many a devotee cured of a long standing ailment or chronic disease. Often times, the Lord Himself has imparted mantrOpadEsham to select devotees in their dreams.

The Aradhanam and Puja in this temple are performed according to Pancharatra Agamam. The puja vidhanam (Puja procedure) was set by Late Sri Vangeepuram Narasimhacharyulu who composed Yadagiri Suprabhatam, Prapatti, Stotram, Mangalashasanam and served as Sthanacharya of this temple

There are a number of busses from Hyderabad and Secunderabad. You can also take a train from secunderabad. You have to get down at Raigiri railway station. From there you can take AutoRickshaw or Tonga.
To get up to the hill you can walk the stairs (not very hard) or can take a bus.


Festivals at Yadagirigutta Sri Lakshminarasimha Swamy Temple :
Every year Sri Swamy vari Brahmothsavams are being performed during the months of Palgunam i.e. from Shudha Vidiya to Dwadasi for (11 ) days (normally in Febrauary & March).
During the Brahmothsavams cultural programs like Harikathas, Bajans, Vocal recites, Upanyasams, Bharatha Natyams and Dramas will be arranged with the well known artists and Scholars from the different places.
Posted by Rajesh. CTR at 11:02:00 PM