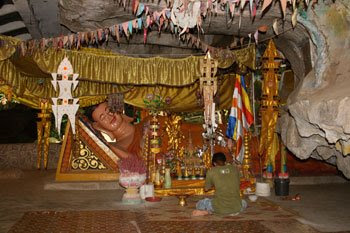 Description : Wat Kirisan is a modern temple built at the base of a large karst formation with numerous caves and passages on the inside. The main pagoda is located outside the karst, and from there you can take an underground passage to go to the shrines and caves on the inside. There is also a large reclining Buddha inside the karst formation too. The cave network is explorable with a proper light source, but a guide is recommended for serious exploration..

Armed with a flashlight, the guide leads visitors down the temple steps and under the mountain into a channel carved out by a now-defunct river.

"During the 1970s, the Khmer Rouge used the soil in this cave for the rice paddies nearby because it was full of minerals," he said. "Later, Vietnamese soldiers hid in the caves, but the Khmer Rouge found them and killed them. Some Vietnamese officials returned to collect the bones, but many of their bones still remain in hidden recesses."

Around the perimeter of the rock walls are grottoes, carved by ancient streams, which contain multiple Buddhist and animist shrines. Some of the grottoes lead to vast underground caverns with lunar-like landscapes and echo with the eerie sound of water softly dripping into the underground pools. People come here to pray to the forest spirit for health, wealth and better life.