Temple of Hephaestus and Athena Ergane 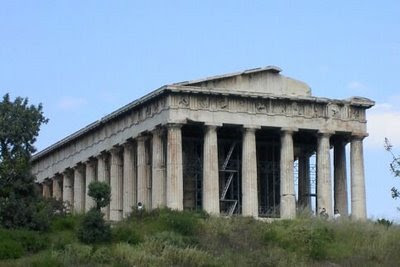 Name : The Temple of Hephaestus and Athena Ergane also known as the Hephaisteion or Theseion,

Location : It located at the north-west side of the Agora of Athens, on top of the Agoraios Kolonos hill

Description : This is the best preserved ancient Greek temple. It is a Doric order peripteral temple. From the 7th century until 1834, it served as the Greek Orthodox church of St. George Akamates.

Construction : After the battle of Plataea, the Greeks swore never to rebuild their sanctuaries, destroyed by the Persians during their invasion of Greece, but to leave them in ruins, as a perpetual reminder of barbarian ferocity. The Athenians directed their funds towards rebuilding their economy and strengthening their influence in the Delian League. When Pericles came to power, he envisioned a grand plan for transforming Athens into the centre of Greek power and culture. The temple of Hephaestus in the Agora was meant to embody the richest evidence of Athenian tradition, conservatively in the Doric order and the full complement of carved metopes that had long been Athens’ pride on its conspicuous Treasury at Delphi.

The architect was one of the ones who helped on the Parthenon, Ictinus. The material used is Pentelic marble with the exception of the lowest step of the crepidoma which is from limestone and the decorative sculptures for which the more expensive Parian marble was chosen.

The building has a pronaos, a main room housing the cult images of the deities, namely a cella, and an opisthodomos. The alignment of the antae of the pronaos with the third flank columns of the peristyle is a unique feature of temple building at the middle of the 5th century BCE.

In the 3rd century BCE trees and shrubs (pomegranates, myrtle and laurel) were planted around the temple, creating a small garden.

In the 7th century CE, the temple was turned into a Christian church, dedicated to Saint George, and under this capacity it was used as a burial place for non-Orthodox Europeans.