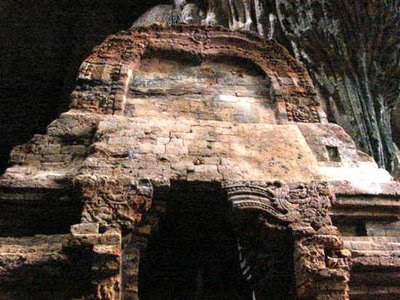 The winding dirt road to the temple snakes past scenic views of the Cambodian countryside, lush with rice paddies, small farms and dramatic limestone formations, covered in dense vegetation.

There is brick temple within the cave that dates back to 7th century during the Funan period. It has over the course of millions of year, grown into an almost prefect linga.

Phnom Chngouk itself is a hulking limestone karst, which contains many hidden chambers, rocky outcrops and stalactites, formed by calcium carbonate deposits in water. The largest cave contains an ancient red brick Hindu temple resting under a massive rock formation resembling an eagle.

Now the temple is tended to by the elderly Loak Ta Neak Sohl, or "Grandfather White Dragon". He came to this area 12 years ago to devote himself to the Buddhist dharma and meditate. At that time not many people knew about this temple; there were no steps up to the cavern, only forest and rocks. With his encouragement, the villagers pooled their money to build stone steps up to the temple.

The slight, wiry patriarch explained that many electronic devices such as cell phones and watches cease to work in the cave, and that even airplanes and helicopters never fly over the site, as it interferes with their controls.

Next to the main chamber is a passageway that leads to the interior of the cave. The path is slippery and dark, and littered with large boulders, a stalactite resembling the head of a cow, and a cool, subterranean pond filled with tiny black fish.

The journey through the cave and out to the rice fields below and behind the mountain is easily negotiated by the young boys who hop effortlessly through the obstacles with only a flashlight. But it is not an easy trip for first-time visitors.

Tourists don't often explore this cavern, as they are too scared. Only visitors under 80 or 90 kilogrammes are advised to go here as some of the passageways are too tight for larger visitors.