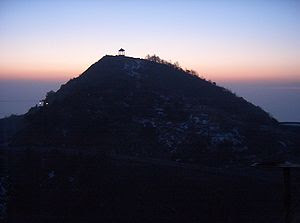 The Five Great Taoist Mountains
The Taoist Five Great Mountains are arranged according to the five cardinal directions of Chinese geomancy, which includes the center as a direction:

Legend : According to Chinese mythology, the Five Great Mountains originated from the limbs and the head of Pangu, the first being and creator of the world. Because of its eastern location, Mount Tài is associated with the rising sun which signifies birth and renewal. Due to this interpretation, it is often regarded as the most sacred of the Five Great Mountains. In accordance with its special position, Mount Tài is believed to have been formed out of Pangu's head.

The Four Sacred Mountains of Buddhism

The Buddhist Four Sacred Mountains in China are: