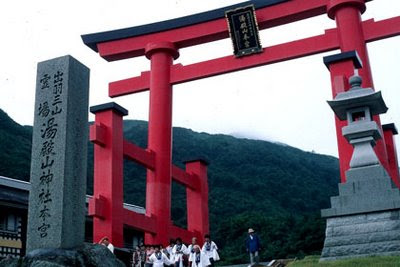 Location : Being one of the 3temples of Dewa Sanzan, it is also located in the center of Yamagata prefecture, between Tsuruoka and Yamagata city, Japan.

Description : The three sacred mountains of Dewa, known in Japanese as "Dewa Sanzan" have been the object of worship for centuries. The 3 mounts are Haguro-san, Yudono-san and Gas-san.

Mount Yudono (1,504m) is another two and a half hour walk. The first is 40min descend where the trail becomes a slippery stream bed. Here a series of ladders and chains help us descend the final stretch to the Yudono-san Jinja. then it is a steep hike up before reaching Yudono-san Shrine, the holiest of the three, although it is just a big rock and a torii.

There is a huge orange rock with a hot spring bubbling from it's top. The whole rock was continuously lapped by water from the spring. The rock itself is said to be an embodied deity. Yudono-san Jinja has the strictest rituals of the three mountains.

Yudono-san can also be accessed via the three km trail from the Yudono-san Hotel to Senninzawa.