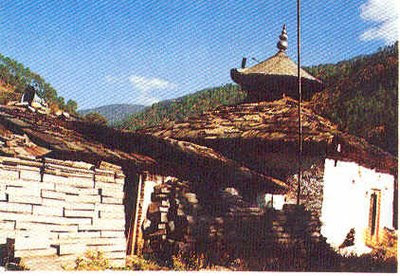 Location : This temple is situated at the confluence of the Bal Ganga and Dharam Ganga rivers, at a motorable distance of 59 kms. from Tehri, Uttaranchal.

Legend : It is believed that Duyodhan offered tarpana here. According to legends, it is at this temple that the Pandavas encountered Rishi Balkhily at Bhrigu Parvat when they were on the lookout for Shiva after the Kurukshetra battle. The rishi directed them to the site of the confluence to meet an oldman meditating there. But when the Pandava got there, the old man vanished and instead, a shivling appeared there. Rishi Balkhily instructed the Pandavas to embrace the Shivling in order to free themselves from their sins. Their impressions are stamped on this Shivling – the biggest Shivling in northen India.

Attractions : Buda Kedar, besides being famous for its temple also proves to be a bird watcher’s paradise. Huge variety of colorful mountain birds can be sighted here in their natural environment. Trekking through the wooded hills is also a hit amongst the adventurous lot of tourists.