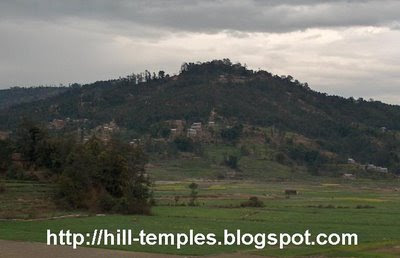 Name : Changu Narayana temple. The place is also known by the names such as DOLA SIKHARA, GARUD NARAYANA, CHAMPAKA NARAYAN and DOLA PARVAT.

The ancient temple of Changu Narayana is located on a high hilltop that is also known as Changu or Dolagiri. The temple is surrounded by forest with champak tree and a small village, known as Changu Village. The temple is located in Changu VDC of Bhaktapur District, Nepal. This hill is about 8 miles east of Kathmandu and a few miles north of Bhaktapur. The Manahara River flows beside the hill. This shrine is dedicated to Lord Visnu and held in especial reverence by the Hindu people. This temple is considered as the oldest temple in Nepal.

In ancient time a Gwala, a cow herder, had brought a cow from a Brahman named Sudashan. The cow was known for producing large quantity of milk. The Gwala used to take the cow to Changu for grazing. At that time Changu was a forest of Champak tree. While grazing the cow it always goes to the shade of a particular tree. In the evening when the Gwala took the cow home and started milking the cow he got only very few amount of milk. This continued several days. He became very sad so he called the Brahmin and told him that the cow is not giving enough milk.

Brahmin after observing the fact from his own eyes then planned with the Gwala to inspect the activities of cow during the day while she was grazing in the forest. Both Brahmin and Gwala hide themselves behind the trees and speculate the activities of cow. The cow went into the shade of a particular champak tree. To their surprise a small black boy came out from the tree and started drinking the cow milk. Both became very furious and they thought that the boy must be the devil and tree must be its home. So Brahmin cut down the champak tree. When the Brahmin was cutting down the tree a fresh human blood came out from the tree. Both Brahmin and Gwala became worried and they thought that they have committed the great crime and they started crying.

From the tree lord Vishnu emerged out and he told the Brahmin that it was not their fault. Lord Vishnu told them the story that he had committed a heinous crime by killing Shudarshan’s father unknowingly while hunting in the forest. After that he was cursed for the crime. He then wandered on earth on his mouth, the ‘Garuda’ eventually descending on the hill at Changu. There he lived in anonymity, surviving on milk stolen from a cow. When Brahmin cut down the tree, lord Vishnu was beheaded which freed Lord Vishnu from his sins. After hearing these words from Vishnu, Brahmin and Gwala started worshiping the place and they established a small time in the name of Lord Vishnu. Ever since that day, the site has been held sacred. . Even today we can find the descendant of Sudarshan Brahimin as priest of the temple and the descendents of Gwala as ghutiyars (conservators). 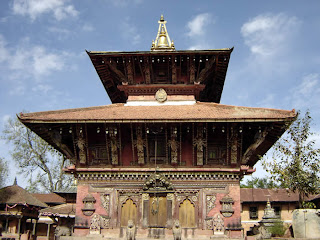 Description : The temple is surrounded by an evergreen lusty forest all around it with a typical traditional Nepalese settlement on its close suburb. The 1541m high hillock, upon which the temple rests, had also been used as a forest-hill-fort in the past.

During Lichhavi period it was not named as Changunarayan. It was then called Dolasikhar Swami. It was called so because the hill at which the temple is located is called Dolashikar and it is regarded as the guru so the name Dolashikar Swami is given.

The founder is believed to be Hari Dutta Verma who had built Changunarayan temple along with three other temples at the four cardinal directions of the Kathmandu valley, dedicated to the Hindu God Narayan. Changunarayan is also famous by the name of Champaknarayan and Garudnarayan. The three storied and two roofed temple of Changunarayan is the finest example of the Nepalese temple architectural design built in the “popular Nepalese style” on a one tired brick-stone platform. Its top roof is made out of gilded copper sheets while the lower one is having a traditional tiled roof. On the struts of the two-tiered Changu Narayan Temple, are the ten incarnations in which Narayan destroyed evil-doers.


It remains a milestone in Nepali temple architecture with rich embossed works. The two storied roof temple is standing in a high plinth of stone. According to Professor Madhan Rimal ,Department of Sociology and Anthropology, Tribhuwan University, the temple is neither in Shikhara Style nor the Pagoda style. It has a unique architect which he would like to describe as traditional Nepali style temple. The temple is all surrounded by sculptures and arts related to Lord Vishnu. Also we can find the temple of lord Shiva, Ashta Matrika, Chhinnamasta, Kileshwor and Krishna inside the courtyard of main temple.

There are four entrances to the temple and these four entrance gates are guarded by life size pairs of animals such as lions, sarabhas, graffins and elephants on each side of the entrances. The ten incarnation of Lord Vishnu and the other idols are carved in the struts, which support the roof. The entrance door looks like gold plated with carving of Nagas (snakes). On the main entrance gate (i.e. western entrance gate), we can find the Chakra, Sankha, Kamal and Khadga all at the top of a stone pillar. These stone pillars has inscription in Sanskrit. This inscription is considered to be the oldest inscription of Nepal and the stone inscription pillar was erected by Lichhavi King Manadeva in 464 AD.

The following monument are located while visiting the temple from the right side after entering from the main entrance (Eastern gate) to courtyard.
1. Historical pillar erected by Mandeva in 464 AD Garuda:- flying vehicle of Lord Vishnu which has got a human face and is a devotee of Vishnu.
2. Statue of Bhupalendra Malla, King of Kantipur and his queen BhuwanLakshmi.
3. Chanda Narayan (Garuda Narayan):- 7th century stone sculpture of Vishnu riding on Garuda. This sculpture has been depicted in the 10 rupee paper note issued by Nepal Rastra Bank
4. Sridhar Vishnu:- 9th century stone sculpture of Visnu, Laxmi and garuda which stands on the pedestals of various motifs.
5. Vaikuntha Vishnu :- 16th century sculpture of Visnu seated on the lalitason position on the six armed Garuda and Laxmi seated on the lap of Vishnu
6. Chhinnamasta:- Temple dedicated to Chhinnamasta devi, who beheaded herself, offered her own blood to feed the hungry Dakini and Varnini.
7. Vishworup:- 7th century stone sculpture- beautifully carved that depicts the scene from the Bhagwat Gita, in which Lord Krishna manifests his universal form to his devotee Arjun.
8. Vishnu Vikrant :- 7th century sculpture of Trivikram Vishnu that depicts the scene of popular Hindu myth of Lord Vishn and his beloved Bali Raja.
9. Narasimha :- 7th century sculpture of Narasimha , an incarnation of Lord Vishnu, killing the demon King Hiranyakasyapa to save his beloved devotee Pralahad.
10. Kileshwor:- small two storied temple of lord Shiva, who is believed to have appeared in this place for the protection of the hill.


This place has also been a pilgrimage site for the multitude Hindus residing all over the world especially for the followers of the Vaisnavait sect of the Hinduism.This has equally been a sacred religious site for followers of the Buddhism as well from the very beginning. The Buddhists take this temple as of their God Lokeswora, the HARI HARI HARI VAHANA LOKESWORA. This unique tradition found prevalent only in Nepal, has also made it distinct. This is the rare temple found in Nepal where both Hindus and Buddhists alike offer their reverences. This must be taken as an example of a unique tradition of religious tolerance and harmony that is rare elsewhere.

Festivals : The main Jatra of this temple is celebrated in the month of Baisakh however we had been hearing wrong that the Jatra takes place during the month of Magh. This is the rare temple found in Nepal where both Hindus and Buddhists alike offer their reverences. Asadh Sukla Ekadasi, Krisna Janmaastami and Haribodhani Ekadasi are some of the important events observed here every year in which a great number of devotees pour here from far and wide places take active participation on them by offering worship to the Lord. This tradition has been continuing since very long. Twice in every year, the main idol of the temple is taken to the Hanuman Dhoka Royal Palace of Kathmandu in August-September and December and January respectively in order to follow an age long tradition.

Recognizing its age long historic and cultural values, the world Heritage Committee of UNESCO has inscribed it into its world heritage list and declared it as a world heritage site in 1979 making it a common property of the entire mankind living in this earth.

Rampant mining of sand and stones from the Manohara stream is going on since long time. Local administration has failed to control the mining activities. Because of the mining activities the temple area has become prone to landslides. Due to overgrazing in the nearby forest, the chances of soil erosion and landslide are very high.