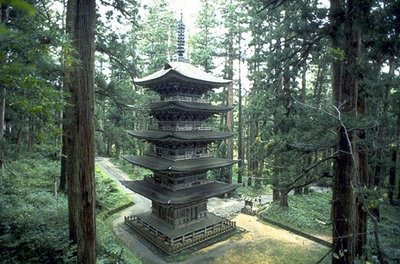 Location : The area is a major pilgrimage destination for the yamabushi (mountain priests) and followers of the Shugendo sect.

The Dewa Sanzan are located in the center of Yamagata prefecture, between Tsuruoka and Yamagata city. Haguro-san is less than 15km away from Tsuruoka, but the other two peaks are some 20km south from it.

It is possible to visit the three peaks in a long, hectic day, but it is advisable to spend a night in one of the numerous shukubo (temple lodging).

Description : The three sacred mountains of Dewa, known in Japanese as "Dewa Sanzan" have been the object of worship for centuries. The 3 mounts are Haguro-san, Yudono-san and Gas-san.

Mount Haguro (414m) is the smallest of the three and buses go as far as the summit. The trek starts near the 600 year old, wooden five-storied pagoda("gojuto") built without a single nail. Then the path winds its way through an enchanted forest of ancient cedars and cryptomerias while ascending 2,446 finely sculpted stone steps, it isn't very strenous and takes less than an hour. There are 33 carvings in the steps up the mountain, which are said to bring good luck to anyone who finds them.

Atop the mountain is the shrine of Gassai-den which houses the deities of the three mountains, Tsukiyomi-no-Mikoto, Oyamatsumi-no-Mikoto, and Ideha-no-Mikoto. After visiting Haguro, white-robed pilgrims trek upward through the mountain forests to the shrines of Gassan and Yudono.

The deity of Yudono lives, not in a building, but in a hot water fall. Pilgrims take off their shoes, and some their clothes, to bathe in the sacred cascade.

The summit of Mount Haguro is defined by a shrine and torii. The main attraction is the Sanzan Gosaiden, venerating the spirits of all three mountains.

Festivals : The three sacred peaks attract pilgrims during spring, summer, and fall, with the largest Haguro festival being held on July 15.

Attractions : If you want a real temple experience, then try to stay in the Shukubo that is actually part of the temple on top of Haguro-san. It is much more beautiful and atmospheric. Get up at 5am and you can watch the morning ritual, which is a mixture of Shinto and esoteric Buddhism with taiko drums, haunting chants, beautiful ritualized movements, and incredible costumes.

If you are interested in Buddhism or Japanese culture, you might be interested in the "Yamabushi Experience", a three day chance for foreigners to go on a pilgrimage and learn about Buddhism during the summer. For more information call the shrine at (0235) 62-2356.