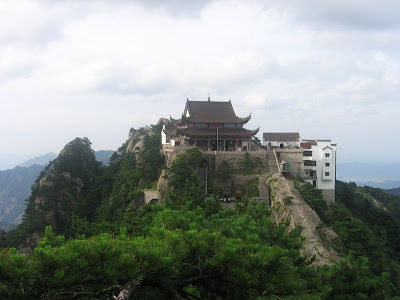 Location : It is located in Qingyang County in Anhui province and is famous for its rich landscape and ancient temples.

Description : Jiuhuashan is one of the four sacred mountains of Chinese Buddhism. The 100 km2 area is full of ridges and peaks, exotic-shaped stones, gushing fountains, roaring waterfalls, and clear streams.

Many of the mountain's shrines and temples are dedicated to Ksitigarbha (known in Chinese as Dìzàng), who is a bodhisattva and protector of souls in hell according to Mahayana Buddhist tradition. Pious Buddhists often come to this popular attraction in Anhui to climb to Greater Tiantai peak, which is regarded as Jiuhuashan's most important peak, although it is not the tallest.

The original name of the mountain was Mt. Jiuzishan( Nine Peek Mountain ). However it was renamed Mt. Jiuhua, meaning "the Mountain of the Nine Lotuses." Legend states that one day, Libai - the famous poet of the Tang Dynasty - came to visit this mountain. The poet was intoxicated with the scene of nine peaks that look like lotus blooms from heaven. Out of admiration he wrote the lines: "From the azure skies above descends a jade-like flow, and nine fascinating lotuses rise out of the hills below."

It was not until the late eighth century that the mountain became a place where religious rites were held to worship the God of Earth. The construction of temples started in the Tang Dynasty and their enlargement continued in the following dynasties. By the middle of the Qing, Mt. Jiuhua became one of the four great Buddhist Mountains in China (the other three being Mt. Emeishan in Sichuan, Mt. Wutaishan in Shanxi and Mt. Putuoshan in Zhejiang).
"Huacheng Temple" is the oldest temples on the mountain. It looks simple and solemn. Its lintels, brackets and roofs all have artistic engravings on them. The picture "nine dragons are playing with pearls" on a panel in the "Main Shrine Hall" is a consummate piece of ancient Chinese artists. Precious sutras and other cultural relics in Huacheng and other temples are on display in the Historical Relics Museum of the Jiuhua Mountain.