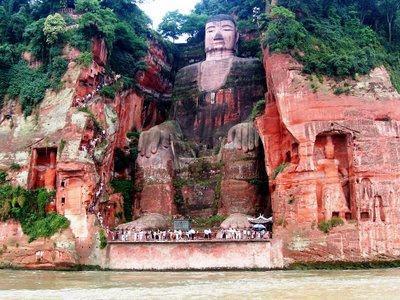 Location : Leshan Grand Buddha sits at the confluence of the Mingjiang, Dadu and Qingyi rivers, in the Sichuan province of the People's Republic of China. Leshan is on the southwestern fringe of the Red Basin in southern Sichuan, about 120 km from Chengdu.

Description : Leshan Grand Buddha (Da Fo), sitting 71 meters high, is the largest Buddha sculpture of Maitreya in the world. The building project was begun in 713, engineered by a monk called Haitong and was completed in the 19th year of Tang Dezhong (803 AD). The statue has undergone a large amount of weathering over the years, and has had many "face lifts" and repairs added, including a water drainage system hidden on the inside. Nevertheless, there is still a great deal of erosion, and officials are worried about possible collapse.

It is a UN-claimed world cultural and natural heritage. State-protected site of cultural relics, State-ranked scenic spot, and one of the "Best Forty" tourist places of China.

Leshan Grand Buddha has beautiful surroundings of green hills and vast waters. Around it are numerous cultural and scenic spots. There are Mahao Cave Tombs of the Han Dynasty, Lingbao Pagoda of the Tang Dynasty, Lingyun Temple, Dongpo Tower Study, Yijing Annotation Cave, Moruo Memorial Hall, Wuyou Temple, and the Heavenly-Buddhist Kingdom. All there present us with a great painting of the nature. Visitors, no matter in boats or on the hill paths, will all enjoy it, I am sure.''

It is possible to walk from top to bottom (and back up again) along a staircase carved in the wall overlooking the Buddha. A popular activity near the head is for people to have their photo taken "touching" the nose or sticking their finger in the ear of the buddha, supposedly for good luck.