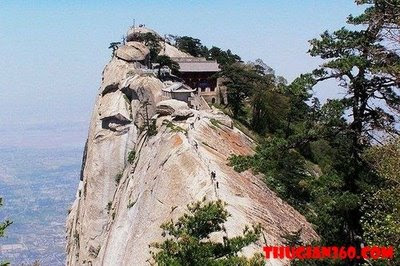 Location : Mt. Hua is located in the Shaanxi Province of China. It stands to the south of Huayin City, 75 miles east of Xian. From the map, this mountain is located close to Himalayas of Tibet. 'Shan' means 'mountain' in Chinese, thus the name 'Hua-shan'.

Religion : Mt. Huashan is also a holy mountain of Taoism. It is said that Lao Zi (Lao Tzu), the founder and patriarch of Taoism, once lived and gave sermons here. Today many Taoism temples are also located on Mr. Huashan which helps explain why this is a much-visited area.

Description : When seen in a certain way, the five peaks of Huashan look like five petals of a flower. This is how Huashan got its nickname of Flowery Mountain.

Formerly the five mountains were dotted with temples but now only a few remain. These days the majority of visitors to Huashan are Chinese youth on vacation. However the mountain routes are still trekked by devoted pilgrims and wandering monks intent of visiting the sacred shrines.

In order to reach certain temples and the caves of the sages great courage is needed. Pilgrims must scale cliffs with only a linked chain for support and to fall is certain death.

There are three ways up to Huashan's North Peak (1613 m), the lowest of the mountain's major peaks. The most popular is the also the original route, which winds for 6 km from Hua Shan village to the north peak. There is also the cable-car, as well as a path that follows the cable car to the North Peak. From the North Peak, a series of paths rise up to the four other peaks, the West Peak (2038 m), the Center Peak (2042 m), the East Peak (2100 m) and the South Peak (2160 m).

The North Peak, which was called Clouds Stand by ancient people, looks like a flat platform in the clouds. The peak is 1,614 meters (about 5,295 ft) high above sea level. The most important site on the North Peak is the Zhenwu Hall for God of North. The North Peak is very popular for climbing. 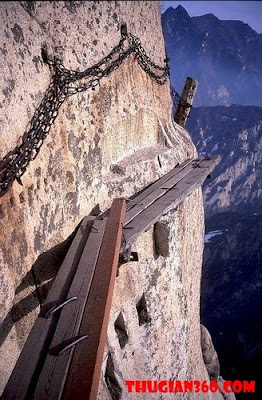 Nowhere are the cliff more difficult to climb than the South Peak. A tortuous 15 kilometer stepped path leads to the Green Dragon Ridge (Bilong ji) where other trails lead to the major peaks. 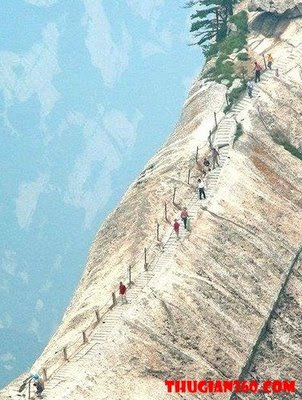 This picture was taken at the base of the West Peak climb. 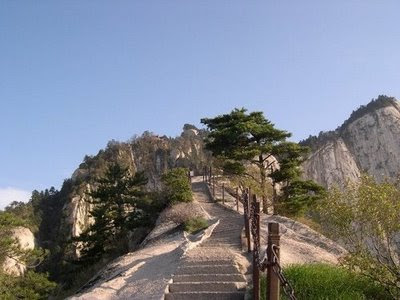 These are the Heavenly Stairs.These steps are the Starting Point for the hiking trip up the West Peak mountain.As you can gather, the initial part of the climb seems steep, but safe. In addition, the view is awe-inspiring.

The Middle Peak, which is always connected with a beauty, is also called Jade Maiden Peak. Story goes that Nongyu, the daughter of King Mugong (659B.C.-621B.C.) of the Qin Kingdom (770B.C.-476B.C.), was tired of the life in the court. So she and her husband lived alone at Middle Peak. The East Peak is 2,090 meters (about 6,857 ft) high above sea level. It is also called Facing Sun Peak because the top of the peak is the best place to watch the sunrise. 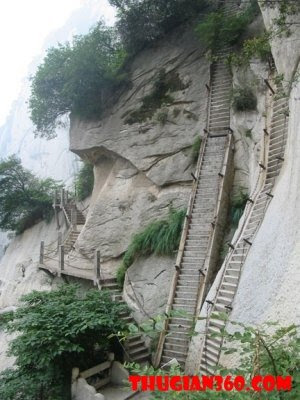 Recent Developments : As tourism has boomed and the mountain's accessibility vastly improved with the installation of the cable car in the 90s, visitor numbers surged. Despite the safety measures introduced by cutting deeper pathways and building up stone steps and wider paths, as well as adding railings, fatalities continued to occur. The local government has proceeded to open new tracks and created one-way routes on some more hair-raising parts, such that the mountain can be scaled without significant danger now, barring crowds and icy conditions. Some of the most precipitous tracks have actually been closed off.

The former trail that leads to the South Peak from North Peak is on a cliff face, and it was known as being extremely dangerous; there is now a new and safer stone-built path to reach the South Peak temple, and on to the Peak itself. The infamy and perilousness of the original route can be enjoyed in a story put on the web page of a person called Rick Archer with the title "The Deadly Huashan Hiking Trail"