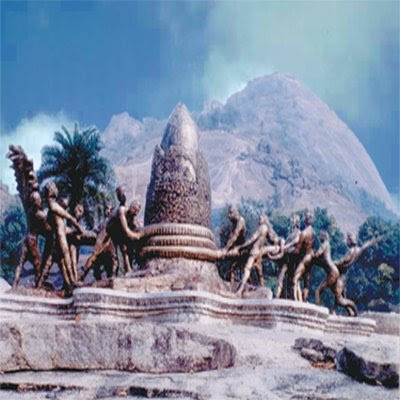 Legends : Mandar is associated with
1) Amritmanthana which suggests that the hill was used by the gods to churn the ocean to procure amrit. The serpent, Basukinaga offered to serve as the rope and has left behind an impression of the coil on the granite hill.

2) It is believed that panchjanya, the conch shell used in Mahabharat War was discovered here in the Sank kund.

3) The puranas refer to various sacred places on the hill which is also believed to be the abode of Vishnu under the title of Madhusudana or the destroyer of a demon called Madhu who was killed by Vishnu and then covered by the Mandar hill. Kalidasa’s kumarasamahava refers to foot marks of Vishnu on the slopes of Mandar.
Besides inscriptions and statues there are numerous rock cut sculptures depicting various Brahmanical images.

4) The hill is equally revered by the Jains who believe that their 12th Tirthankara attained nirvana here on the summit of the hill.

Description : At the salvation place on Mandar Hill, a grand Jain Mandar Hill Temple is erected. A pair of feet images (about 3000 years old) are installed there.

There is a place where Lord Vasupoojya attained Kevalgyan (supernatural knowledge) near the place of salvation. Three pairs of ancient feet images are installed here.

Near the place of salvation, a beautiful cave temple is viewable with 5-feet-tall standing idol.

can u pleaz gimme the address of madhusudhan temple in mandhara hills??

Hi, i searched on net and found only these details about madhusudan temple. Madhusudan Temple is a sacred temple of Lord Vishnu situated near Mandar Hill in a nearby town called Bounsi or Balisa Nagar.

I am Belongs To Sabalpur My Self Ashutosh Singh Kanhaiya This Is One Of Peaceful & Beautiful Place So I Please Visit One Time Hope You will Be Satisfied..