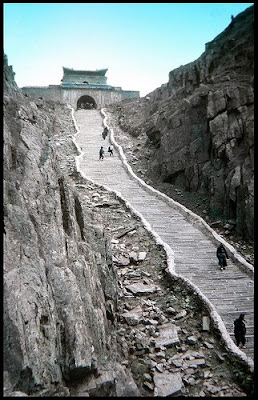 Location : It is located north of the city of Tai'an, in Shandong Province, China.

Description : This is a mountain of historical and cultural significance. The tallest peak is Jade Emperor Peak, which is commonly reported as 1545 metres (5069 ft) tall.

Mount Tai is one of the "Five Sacred Mountains". It is associated with sunrise, birth, and renewal, and is often regarded the foremost of the five. The temples on its slopes have been a destination for pilgrims for 3,000 years.

History : Traces of human presence at Mount Tai date back to the Paleolithic period. Human settlement of the area can be proven from the neolithic period onwards. During this time, two cultures had emerged near the mountain, the Dawenkou to the north and Longshan to the south.

Religious worship of Mount Tai has a tradition of 3,000 years, it has been practiced from the time of the Shang to that of the Qing Dynasty. Over time, this worship evolved into an official imperial rite and Mount Tai became one of the principal places where the emperor would pay homage to Heaven (on the summit) and Earth (at the foot of the mountain) in the Fengshan Sacrifices. In 219 BC, Qin Shi Huang, the first Emperor of China, held a ceremony on the summit and proclaimed the unity of his empire in a famous inscription.

Mount Tai has been a UNESCO World Heritage Site since 1987. In 2003, it attracted around 6 million visitors.

Natural wonders : Mount Tai is a tilted fault-block mountain with height increasing from the north to the south. It is the oldest example of a paleo-metamorphic formation from the Cambrian Period in eastern China. Known as the Taishan Complex, this formation contains magnetized, metamorphic, and sedimentary rock as well as intrusions of other origins during the Archean Era. 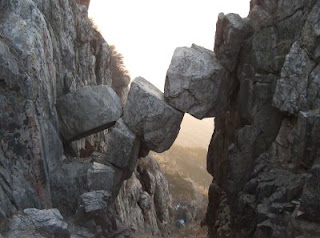 Besides the Jade Emperor Peak, other distinctive rock formations are the Heaven Candle Peak, the Fan Cliff, and the Rear Rock Basin.

Temples : There are 22 temples, 97 ruins, 819 stone tablets, and 1,018 cliff-side and stone inscriptions located on Mount Tai. These include the Azure Cloud Temple dedicated to the daughter of the God of Mount Tai, the goddess Laomu and the Divine Rock Temple which features the Thousand-Buddhas Hall with painted Arhat statues, Dai Miao Temple & Dongyue Temple. 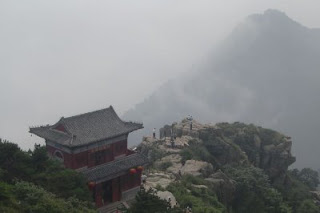