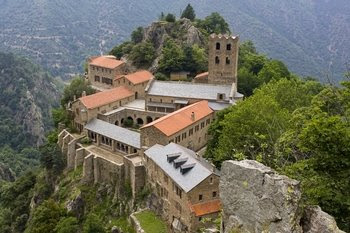 Boasting a spectacular location in the Pyrenees mountains of southern France, the abbey church of Saint-Martin-du-Canigou is a Romanesque treasure from the early 11th century. In addition to its ancient architecture, it is notable for its collection of original 13th-century capitals depicting a variety of imaginative subjects.

Construction on the Abbey of Saint Martin probably began in 1005, the year it was founded by Count Guifre de Cerdanya. The elder brother of Oliba, who was abbot of the nearby Saint-Michel-de-Cuxa, the count eventually became a monk himself in Saint-Martin-du-Canigou. The completion date for the abbey church is usually given as 1009 - one thousand years ago. Benedictine monks were invited to take up residence in the new abbey.

The abbey remained active until it was dissolved in 1783. Thereafter it was abandoned, lying neglected and forgotten throughout the 1800s. Many of the abbey buildings fell into ruin, but happily the church and its tower remained standing in 1902, when restoration work began. The restoration project was led by Mgr de Carsalade du Pont, Bishop of Perpignan. Today, the abbey is active once again, as home to the Community of the Beatitudes.

The abbey is located at about 3,500 feet above sea level in the richly forested Pyrenees mountains. Accessible only by a scenic paved path that winds through the woods, it offers a unique atmosphere along with its rich history and art. Upon arrival at the abbey, head to the visitor's center to purchase a ticket for the next guided tour. A resident monk or nun will lead the tour in French, with translations in several other languages provided as handouts.

Visitors approach the abbey from the east side, which provides a view of the handsome chevet from below. Like many early Romanesque churches, it has a central apse flanked by two smaller apses decorated with Lombard bands, and a triangular pediment above. Another apse extends to the south, as part of a small chapel. The bell tower is attached to the north side of the church. It is built in the distinctive Roussillon style, with a stout square shape, multiple tiers of round-headed openings, and a crenellated top.

Scenic Viewpoint : For a fine view of the abbey from above, head south from the gathering area below the church and up a small trail marked by signs warning about danger. The danger is due to the lack of any fence around the small platform, which looks out over a steep cliff. But the platform is mostly smooth and roomy enough for a few adults to enjoy the view without taking any excessive risks, and the view is exceptional. Just be careful not to trip over a rock!

Hours : Accessible only on guided tours (in French).
Closed in month of January.