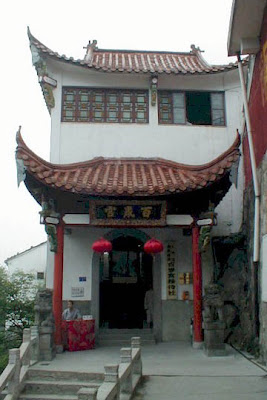 Decsription : Uphill from Qiyuansi temple is a monastery called Baisuigong (Hundred Year Palace), accessible by a tram that runs up the hill to the peak. From here one can walk a couple hundred yards along the ridge to the monastery.

Baisuigong is a Taoist temple perched on the summit of the east peak (Dongfeng). Originally named the Star Picking Temple (Zai Xing An), it was later given its present name in the 16th century when the eminent monk Wu Xia moved to the mountain for the last days of his life. Legend says that after the monk visited temples on Wutai and Emei mountains, he compiled the Huayang Sutras (written in gold dust and his own blood) and died on Jiuhuashan at age 126.

The temple in those days was so remote that Wu Xia's body was only found three years after his death, apparently perfectly preserved. The locals were so amazed that they immediately renamed the temple in his honor. When Emperor Chongzheng of the Qing Dynasty came to power, he had the body of Wu Xia covered in gold leaf and placed in the temple. Imperial recognition allowed the temple to be expanded into the 4th largest on Jiuhua mountain. Even nowadays the body can still be seen seated in prayer.