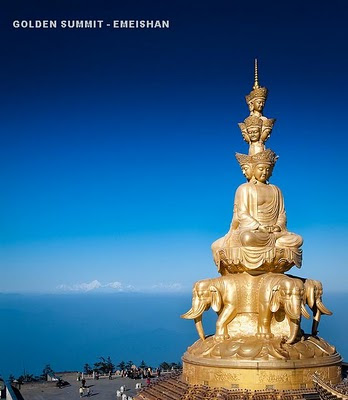 Mt. Emei is located in Leshan City, Sichuan Provincein China. It is towering, beautiful, old and mysterious. Mt. Emei is like a huge green screen standing in the southwest of the Chengdu Plain.

The slopes of Emei Shan have been inhabited since as early as 10,000 years ago. It was originally a Taoist retreat, but became the location of the first Buddhist temple built in China in the 1rd century AD.

Pugong, a medicinal plant farmer, built the Puguang Hall on the Golden Summit in the 1st century AD. In the 3rd century, the Puxian form of Buddhism (which centers on devotion to the Bodhisattva Puxian, or Samantabhadra) became dominant on Emei and the Chinese monk Huichi built the Puxian Temple (now the Wannian Temple) at the foot of the Guanxinpo Terrace.

In the mid-9th century, the Song Emperor Zhao Kuangyin sent a Buddhist mission headed by Master Jiye to India. On his return he was authorized to build temples on Mount Emei, where he preached and translated the Indian Buddhist texts. He was also authorized to cast a Puxian bronze statue, 62 tonnes in weight and 7.85 m high, now in the Wannian Temple.

Ever since, Mount Emei has been one of the most holy places of Buddhism. Extensive rebuilding during the Ming dynasty finally converted most of Emei's Taoist temples to Buddhism.

The natural beauty and sacred significance of Emei Shan has been drawing pilgrims and tourists for 2,000 years.

Emei Shan literally means "Delicate Eyebrow Mountain" - it derives its name from two peaks which face each other and look like the delicate eyebrows of a girl. Mt.Emei is sacred to the Bodhisattva Samantabhadra. 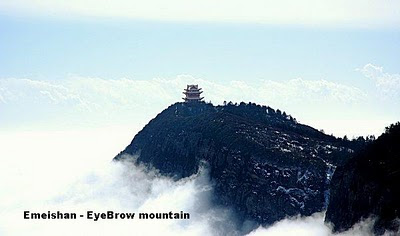 Its main peak, the Golden Summit, is 3,099 meters (10,167 feet) above the sea level, seemingly reaching the sky. Standing on the top of it, you can enjoy the snowy mountains in the west and the vast plain in the east. In addition in Golden Summit there are four spectacles:
1) Clouds Sea
2) Sunrise
3) Buddha rays and
4) Saint lamps. 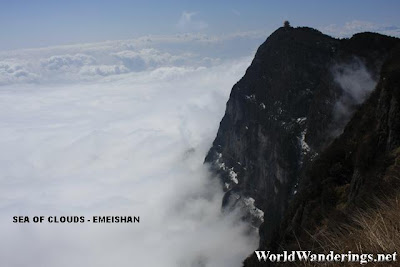 In 1996 Mt. Emei was enlisted in the world natural and cultural heritage by the UNESCO. 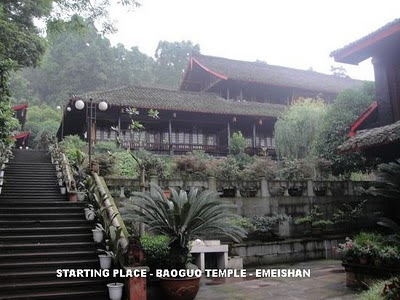 There are many monkeys, who are accustomed to tourists and assertive; they aren't dangerous but will beg for food and grab at bags as hikers walk along the trails. Many hikers carry walking sticks to shoo them away.

There are over 30 Buddhist temples on Emei Shan, 10 of which are large and very old. They are considered masterpieces of creative ingenuity in the way they adapt to the natural enviroment and beauty of the holy mountain. 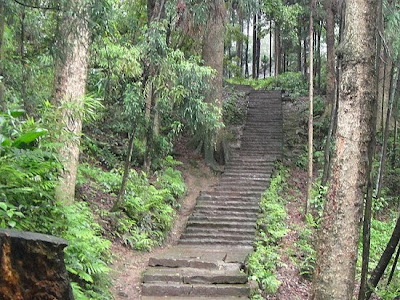 Further up the mountain lies the Crouching Tiger Monastery (Fuhu Si), Emei's largest temple. Once associated with the Taoist martial-arts master Zhang Sanfeng, today it is a Guanyin nunnery. Notable features include the 16th-century, 7m-high bronze Huayan Pagoda, which is engraved with 4700 Buddha images. 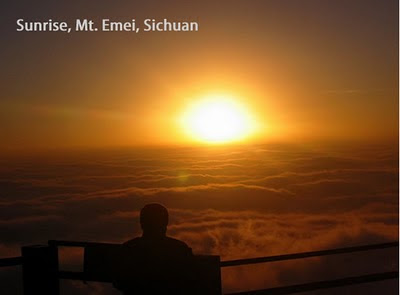 A few hours' walk or a cable car ride leads to the Golden Summit (Jinding), at 3077m. There are two temples here (the friendly Woyun Nunnery and the large Huazang Si) and thousands of padlocks inscribed with couples' names to symbolize eternal love. Jinding is the best place to experience the Four Wonders of Mt. Emei: the Buddha's Halo (rainbow-like rings that surround and move with your shadow), the Sea of Clouds, the Holy Lamp (or Divine Lights) and the Golden Summit Sunrise. 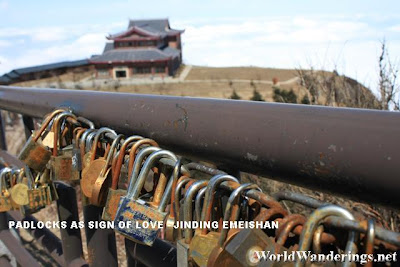 From the Golden Summit you can ride a monorail along the ridge to Wanfoding (Ten Thousand Buddha Summit), the true summit of Emei Shan.

The largest surviving building is Baoguo Monastery, at the mountain base. Built in the 16th century, Baoguo is the usual starting point for any serious exploration. The monastery includes a library of sutras and a huge porcelain Buddha. Further up the mountain lies the Monastery of Hufu, which features a lovely seven-meter high copper pagoda.

Mt. Emei lies 150 km away from Chengdu, 130 km from the Shuangliu International Airport and only 28 km from Leshan city. Access to the mountain is via Emei Shan town, 7km from the base. Minibuses and public buses leave from Emei's main street depot to the trailhead at Baoguo. 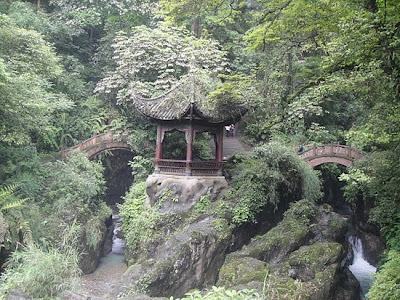 It is five kilometers to the top of Emei Shan, much of it consisting of stone stairs. If you walk it all, plan for a full day up and a full day down (around 10 hours on foot). Monasteries along the way offer reasonably-priced lodging, and there are several comfortable lodges on the summit. Dress in layers - a 20° variance between base and summit is normal.

Minibuses and cable cars can take tourists most of the way up the mountain. Most opt for tours from Chengdu, about three hours to the mountain base, then another two hours to Jieyin Dien, where you already feel the air at 2,540 meters. 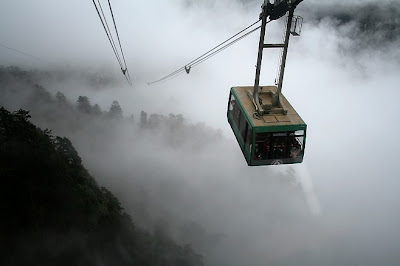 A Swiss-style cable car soars over pines to Jinding, and a final hike of about an hour, huffing and puffing in the high altitude, to the peak. Some spend the night to see the sunrise, others quickly turn around and head back.