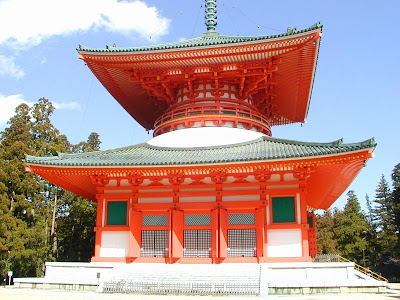 Location : Mount Koya is the generic name of specific mountains in Wakayama prefecture to the south of Osaka. Also, Kōya-san is a modifying word for Kongōbuji. There is no one mountain officially called Kōya-san in Japan.

Description : First settled in 819 by the monk Kūkai, Mt. Koya is primarily known as the headquarters of the Shingon sect of Japanese Buddhism. Located in an 800 m high valley amid the eight peaks of the mountain. This was the reason this location was selected, in that the terrain is supposed to resemble a lotus plant ( Similar to the Taoist temple Huashan in China ), the original monastery has grown into the town of Koya, featuring a university dedicated to religious studies and 120 temples, many of which offer lodging to pilgrims. The mountain is home to the following famous sites:

* Okunoin, the mausoleum of Kūkai, surrounded by an immense graveyard (the largest in Japan)
* Konpon Daitō, a pagoda that according to Shingon doctrine represents the central point of a mandala covering not only Mt. Koya but all of Japan
* Kongōbu-ji, the headquarters of the Shingon sect

In 2004, UNESCO designated Mt. Koya, along with two other locations on the Kii Peninsula, as World Heritage Sites.