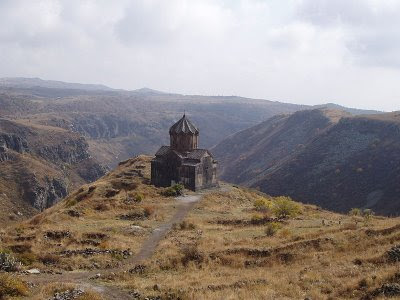 Location : Near the fortress of Amberd on the slopes of Mount Aragats in the Aragatsotn province of Armenia.

Description : Vahramashen Church also known as the Church of Amberd is an 11th century Armenian church. The fortress stands on a rocky cape formed by the rivers Ambert and Arkashen. Later, the fortress and its surroundings belonged to the Pahlavouni princes. The latter were a powerful family in the X century. Ambert was conquered by the Mongols in 1236 and destroyed by fire. It was never rebuilt.
Posted by Rajesh. CTR at 4:57:00 PM