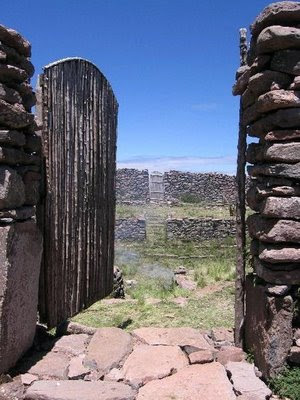 Name : Pacha Tata and Pacha Mama is the Quechan or Inca word for Earth Father and Mother Earth

Location : On the Amantaní island on the Peruvian side of Lake Titicaca.

Description : These are the pre-Inca temples sitting on the two high peaks of Amantani Island which are dedicated to fertility. Pacha Mama and Pacha Tata are two important figures that symbolize the principle of complementarity and harmony in the Andean cultures: the Chacha Warmi. The large hills are covered by small square farms enclosed by four foot stone walls. On the steep stone stairway up to the temple, we are greeted by adorable local children selling bracelets. We can buy Benita's wares.At Pacha Tata we can enjoy the beautiful views of the island and the lake. 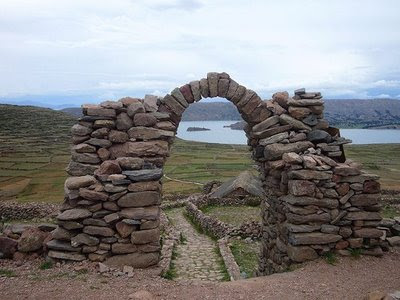 Legend : According to legend, if you walk around the temple three times and make a wish to Pacha Tata, it will come true. After making our wishes, we can watch the sunset across the lake. Then we can walk up the next hill to the Pacha Mama temple and watch the moon and stars glow at night.

Fiesta de la Santa Tierra occurs the third Thursday in January annually. This is the only day the temples (at the top of peaks) are open. The rest of the year it is closed to the public. (You can however take a walk to the top and circle Pacha Mama 3 times for a wish and get a glimpse of the sun going down across the waters of Lake Titicaca and celebrate Mother Earth all around you.)

During the festival the population split in two -- half at the Temple of Pachamama and the other half at the Temple of Pachatata (on Amantani's other peak), symbolizing the islanders' ancient dualistic belief system. A representative of each group will race to a point between the two. According to tradition, a victory for Pacha Mama means a bountiful harvest for the coming season.

Extremely interesting and rather useful, Rajeesh. I shall do my best to let other people know about Amantani Island beliefs, esp. because in the place I am living now, Cieneguilla, an Andean district of Lima, Peru, I have already met two Amantani Islanders, believe it or not. People are quite used to the concept of Pacha Mama, but not to that of Pacha Tata's, which is extremely important so as to understand the Andean dual system properly. I shall also work on the concept of Tío Pachamama (Uncle Pachamama), which exists in Bolivia and which stands for the spirit of the mines, identified now with the Christian Devil (Diablo). Thanks a lot and hope we shall be in touch. I am Javier Alfonso Viracocha Tenorio Maureira (my Facebook)and my e-mail is wiraqocham@gmail.com Bye, Best wishes from Lima, Peru.