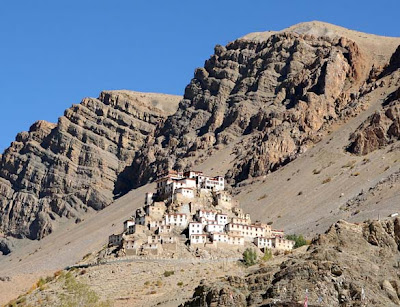 Location : Situated at an altitude of 13,500 feet and in a place that is known as the 'Little Tibet' is Kye Monastery. The monastery is around 12 km north of Kaza in the Spiti valley (the Middle country or the Little Tibet) above Kye village. It can be reached by covering a distance of 210 km from Manali to Kaza and from there following a track on the north that leads to the monastery.

Description : The monastery is a wonderful example of the monastic architecture that came into prominence during the 14th century because of the Chinese influence. Regular invasions have led to temples built over one another. There are low rooms and narrow corridors. Not so well lit passages, difficult staircases and small doors lead to prayer rooms which themselves do not conform to a single design.

The walls of the monastery are decorated with beautiful paintings and murals which instantly attract the attention of visitors. An image of Buddha in the position of dhyana is also there in the monastery.

Kalachakra Ceremony : Kalachakra, for Buddhist, is 1000 years or the 'Wheel of Time'. The Kye Monastery was established in 1000 AD and in the year 2000, it became exactly 1000 year old. This millennium year celebration saw the presence of His Holiness Dalai Lama. The Kalachakra ceremony is also initiated every year by the Dalai Lama. The ceremony is hugely sacred for the Buddhists and sees more than merely pujas and religious congregation. It is actually an opportunity for the Buddhists to arise their Buddha nature by various means - teaching, prayers, blessings, devotions, mantra, yoga and meditation. The ceremony that continues for few days is an excellent way to discover peace within oneself. Infact, the ceremony is considered so auspicious that even being simply present there is believed to free one from his agonies.

The concentration during the ceremony is basically on five subjects - cosmology, psycho-physiology, initiation, sadhana and Buddhahood. Showing way to the devotees are the Kalchakra Mandala and Viswatma deity in union with his consort.