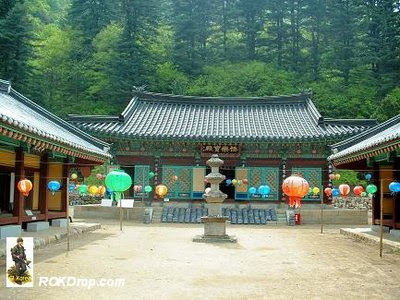 History : This temple was founded in 647 during the Shilla Dynasty by a well respected monk at the time by the name of Jajang who named the temple Hangye-sa. The temple wasn’t always located at its present location because the monks over the years had to move the temple multiple times due to fire. The present version was completed in 1957.

Legend : The name of the temple also has changed over time. Originally called Hangyesa. It has been at its present location for about a thousand years and was called Baekdam-sa when a Buddhist monk had a vision to climb Mt. Sorak and count the number of pools between the mountain and the temple. If he did this, it would protect the temple from fire. The monk climbed Mt. Sorak, walked back to the temple, and counted 100 pools along the way. After his walk it was decided the temple would be called Baekdam-sa meaning the 100 pools temple.

Description : The temple is located in the Inner Sorak area of the Gangwon-do’s, scenic Soraksan National Park which is mostly wild, natural, and untouched by man. For anyone looking for unspoiled wilderness in Korea this is the place. The small village of Yongdae-ri is the access point the temple. From Yongdae-ri a short bus ride takes visitors to the temple located seven kilometers up a twisting and winding road that traverses the Baekdam Valley.

A better option is to avoid the bus and hike up the valley instead. The walk to the temple is only seven kilometers which takes about an hour to complete and will be rewarded with incredible views compared to being crunched into a bus with dozens of oversized visors.

The road to the temple follows a beautiful flowing river that twists and turns through the valley. The water is crystal clear has no mineral taste to it and just had a cool, fresh water.

The valley opens up a bit and the river widens significantly. Then the road reaches a pedestrian bridge that takes visitors into the Baekdam-sa Temple. Across the bridge visitors are welcomed by Buddhist deities located in a small gate. Once into the compound the temple is actually in appearance very similar to other temples in Korea. It has long wooden and colorful buildings. It has a big bronze bell and drum.

Attractions : Attractions at the temple include National Treasure No. 1182--Wooden Amityus Buddha Statue--which dates to the 18th century, and Susimgyo, a wooden bridge in front of the property that spans Baekdam Gyegok valley. Baekdamsa also is near Seoraksan and Mt. Soraksan Nature Reserve.