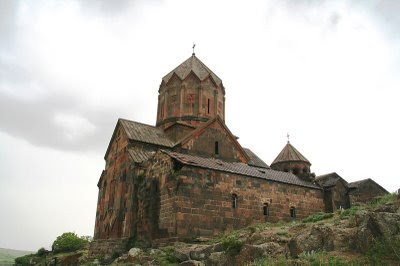 Location : Hovhannavank is an Armenian Apostolic Church monastery located in the village of Ohanavan in the Aragatsotn Province of Armenia. It is situated atop a steep gorge carved by the Kasagh river.

Description : The monastery's title originates from the combination of the name Hovhan (Armenian for Jonah) and the word “vank,” which in Armenian means “monastery.” The monastery was dedicated to John the Baptist, whom Armenians venerate as their patron-saint. The monastery stands on the edge of the Qasakh River Canyon, and its territory is adjacent to the village of Ohanavan.

The oldest part of the monastery is the single nave basilica of St. Karapet (i.e. Holy Forerunner, John the Baptist) that was founded at the beginning of the fourth century by St. Gregory the Enlightener, who baptized Armenia into the world’s first Christian nation. The wooden roof of the early church was replaced in 554 AD with a thatch cover, and the basilica itself underwent profound renovation between 1652 and 1734.

The centerpiece of the monastery is the Cathedral built between 1216 and 1221 through the donation of Prince Vache Vachutian. The Cathedral has a cruciform floor plan, with two story sacristies in each of the four extensions of the church. The dome has an umbrella-shaped roof, which is unique to Armenian churches.