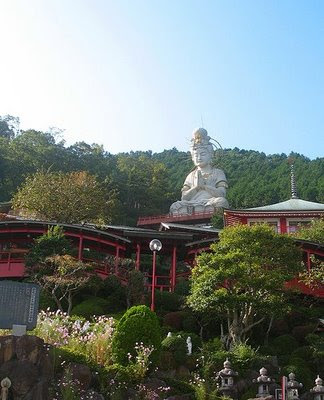 Location : Located in Shizuoka Prefecture, Ito City, in the tiny town of Usami. Usami is a small town on the Izu Peninsula of Japan.

Description : This 50-meter high sitting statue of the Kannon (built to pray for global peace) was constructed in 1982. The Kannon sits on a hill above the town. Reportedly the largest sitting statue of Kannon in Japan. The temple grounds hold a broad array of statues, including those from Tibet and Nepal, numerous mandala, and statues of the Seven Lucky Gods. Some web sites claim it is the Jibo Kannon (Loving Mother Kannon).

The deity depicted in the statue is known as Avalokitesvara. is a bodhisattva who embodies the compassion of all Buddhas. He is one of the more widely revered bodhisattvas in mainstream Mahayana Buddhism. In China and its sphere of cultural influence, Avalokiteśvara is often depicted in a female form known as Guan Yin. (However, in Taoist mythology, Guan Yin has other origination stories which are unrelated to Avalokiteśvara.)

Avalokitesvara is also referred to as Padmapāni ("Holder of the Lotus") or Lokeśvara ("Lord of the World"). In Tibetan, Avalokiteśvara is known as Chenrezig, and is said to be incarnated in the Dalai Lama,[1] the Karmapa[2][3] and other high Lamas. In Mongolia, he is called Megjid Janraisig, Xongsim Bodisadv-a, or Nidüber Üjegči.