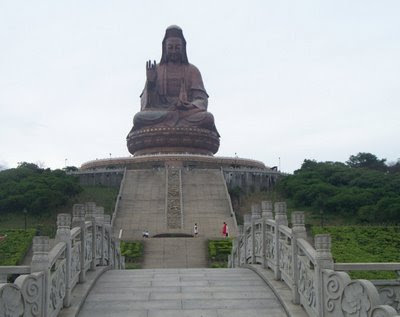 Description : Xiqiao Shan's primary tourist attraction is a gigantic statue of Guan Yin, reminiscent of Hong Kong's famous Lantau Island Big Buddha. Sitting atop one of the highest points of Xiqiao Shan, Big Guan Yin is bronze plated and surrounded by a moat.

This humonguous statue of Guan Yin was built in the 1990's when Xiqiao was first officially transformed into a tourist zone, but the legend of Guan Yin is a very ancient one... Actually, Guan Yin is really the Chinese version of the Indian bodhisattva Avalokitesvara... According to the Lotus Sutra, this being can assume any form required in order to fulfill the mission of relieving suffering so it can be either male or female. In China, Guan Yin is usually portrayed as a woman, just as she appears in the famous Chinese classic saga "Journey to the West".
Commonly known in the West as the Goddess of Mercy, Guanyin is also revered by Chinese Taoists as an Immortal.