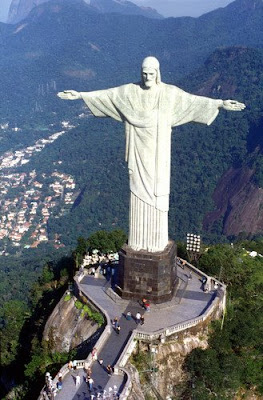 Location : Rio de Janeiro, Brazil. It is located at the peak of the 710-m Corcovado mountain in the Tijuca Forest National Park, overlooking the city.

Description : With arms spread wide -- as if to embrace the whole city of Rio de Janeiro sprawling below in spectacular disorder -- the Cristo Redentor statue can be seen from all over town.

For a pedestal, the statue has the 2,310-foot mountain called Corcovado. The Christ figure on top rises another 100 feet, its arms extending nearly 92 feet from fingertip to fingertip, with a weight of some 700 tons.

French sculptor Paul Landowski and his team of artisans erected the impressive statue to commemorate the hundredth anniversary of Brazil's 1822 independence from Portugal. Due to budget constraints, however, the centennial artwork was finished nearly a decade later in 1931, and then only with help from the Vatican. Sleekly contemporary in appearance, the statue was fashioned of soapstone and concrete.

The Cristo Redentor figure vies with Sugarloaf Mountain as the emblem of the city of the cariocas. And its site offers a view over Rio that is even more spectacular than Sugarloaf's, taking in the famous beaches at Copacabana and Ipanema, tree-lined residential neighborhoods, the bay, and a blue lagoon called Rodrigo de Freitas. Corcovado itself is enveloped within a tropical reserve where waterfalls tumble and butterflies flit through thick forests.

Local residents like to go up to see the statue by riding on a 2.3-mile cog railway whose tracks for cogwheel steam engines were laid up the mountainside in 1885. During the 20-minute ride, the train passes through leafy green tunnels of trees and provides views of Brazil's city of pleasure and poverty, carnival and beaches, far below.

In the evening, powerful spotlights illuminate the statue of Christ, making it glow and appear almost to levitate above the darkened peak. By day or night, no matter where you may go in the city of Rio, the statue has the presence of an icon.