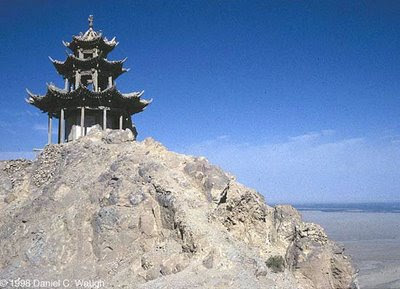 Location : The mountain described by the Tun Huang Lu is directly west from the Mogao oasis, Dunhuang, China ( An oasis strategically located at a religious and cultural crossroads on the Silk Road, in Gansu province, China.)

Apart from its prominence, rising as it does above the surrounding hills, its apparent religious significance may be related to its shape, with three distinct peaks recalling the Chinese character (shan) for Mountain. As Prof. Wu Hung has pointed out, images of mountains with three peaks appear in early Chinese representations of "The Heavens." 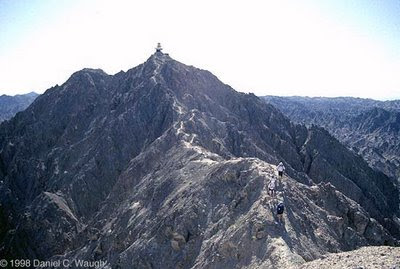 A trail provides access to the top of the mountain. Near the monastery at the Guan-yin Well, a sign on the trail indicates it leads to Guan-yin Shan. The trail is well trodden, but occasionally there are misleading forks; in general one should keep to the right. The trail from the north basically follows the ridge line; as the first photo shows from up on the ridge, those who have sensitivity to exposure at heights probably should not attempt it.

From the Mogao Caves to the top of the mountain takes a couple hours. At the top is a temple built (or at least re-built) in modern times. Apart from the obvious pagoda, it has a small room for visitors to sleep in and a separate room with a shrine to Guan-yin. 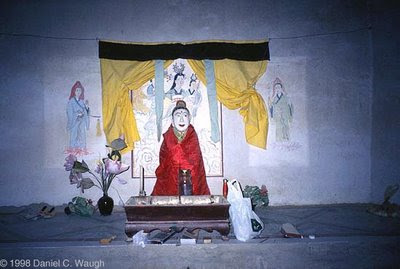