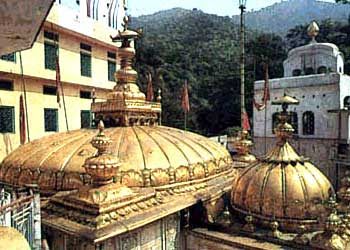 Location : It is perched on a ridge called Kali dhar in Himachal Pradesh. Jwalaji is 30 km. from Kangra, 473 Km from Delhi and 212 Km from Shimla.

Legend : Jwalamukhi is said to be the spot where the half-burnt tongue of Sati fell, hence the burning flames or 'tongues' of fire.

The temple of Jwalamukhi is not an architectural delight. Moreover, there is no idol to worship too. The building has a gilt dome and a silver plated folding doors. Inside, there is a 3 feet square pit with pathway all around. In the centre, there is a hollowed rock over a primary fissure of flame. This one is regarded as the mouth of the Mahakali. Flames emit out from several other point in the pit. They are nine in total and represent the different form of the goddess - Saraswati, Annapurna, Chandi, Hing Laj, Vindhya Vasini, Mahalakshmi, Mahakali, Ambika and Anjana. There are two lions in front of the temple.

The History of Jwalamukhi Temple : The history of the Jwalamukhi Temple states that the great Mughal emperor Akbar visited it and tried to douse of the flame of the temple. However, when unsuccessful, he willingly submitted to the power of the goddess. He presented a gold chhatri (umbrella) for the goddess which is said to have turned into copper when he turned around to have a look at it before leaving. The King of Nepal presented a magnificent bell, which adorns the front hall. Milk and water is offered to the flames, the 'puja' going on for the whole day.

Time to visit : During March-April and September-October every year, colorful fairs are held during the Navratra celebration.