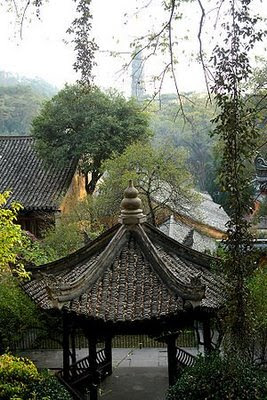 Significance : This mountain temple is the site where indigenous Chinese Buddhism branched away from Buddhist teachings and doctrine commonly found in India. From there, the Tiantai sect of Buddhism spread to both Korea and Japan during the Tang Dynasty (618-907 AD). The tall brick Guoqing Pagoda built at the temple in the year 597 is still standing, making it one of the oldest surviving brick pagodas in China (after the 40 m tall Chinese Songyue Pagoda built in 523 AD).

Description : It is a Buddhist temple originally built in 598 AD during the Sui Dynasty, and renovated during the reign of the Yongzheng Emperor (r. 1722-1735 AD) of the Qing Dynasty. It is located roughly 220 km from the city of Hangzhou. It was the initial site for the creation of the Tiantai Mahayana Buddhist sect, founded by Zhiyi (538-597 AD). The temple covers a square surface area of some 23000 square m (75440 ft squared). The temple features 600 rooms in a total of 14 different halls, including the Grand Hall of Sakyamuni, the Hall of Five Hundred Arhats, the Hall of Monk Jigong, etc. The exterior of the temple features Chinese pagodas such as the Sui Pagoda, the Seven Buddha Pagoda, and the Memorial Pagoda of Monk Yi Xing (683-727 AD).
Posted by Rajesh. CTR at 10:49:00 PM