Baguashan and the Great Buddha Statue 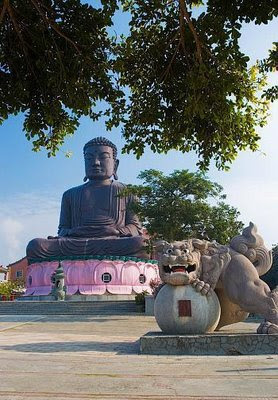 Description : On Taiwan's eastern fringe is high Baguashan (Eight Trigram Mountain). On the top of which its crowning glory – the iconic 92m-tall Great Buddha Statue.

Towering 22m above its brightly coloured lotus flower base, the seated likeness of the Sakyamuni Buddha has become one of Taiwan's most recognizable landmarks since its construction in 1961. The serene figure is the dominant feature of the local landscape, visible from several places in town and giving the area an enchanting ambience.

Built on the former site of a commemorative tablet erected during the Japanese occupation, it is made entirely of reinforced concrete and has a hollow, six-storey interior. The inside walls, decorated with dioramas depicting the stages of Buddha's life, have been given a facelift, and visitors can ascend stairs leading as high as the statue's neck. 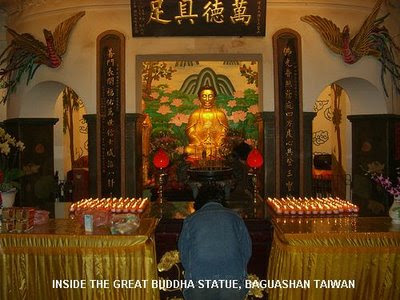 Baguashan affords great views of Changhua, on very clear days yielding vistas to the sea; for this reason it was an important military lookout up until the Japanese colonial period. Behind the statue to the east is the three-storey Great Buddha Temple, the top floor of which is a superb place to watch the sun set over the Great Buddha's shoulders. Still further east is the tranquil Baguashan Scenic Area, interspersed with short walkways leading to pavilions and city overlooks.