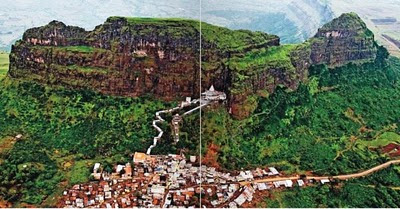 The Saptashrungi Devi temple is located at Vani which is 60kms from Nashik in Maharashtra. 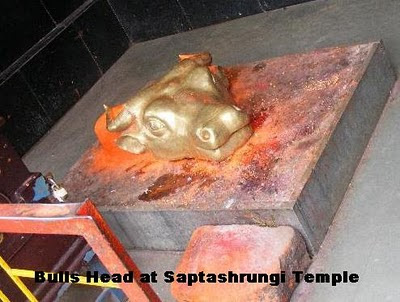 It is believed that the Devi Mahatmya, a sacred book which extols the greatness of Devi and her exploits was composed at this place by the sage Markandeya, who performed rigorous penance on a hill opposite the one on which the Devi resides, which is now named after him.

The temple, which sort of sticks to the cliff, is 1230 meters above sea level. There is an old path with steps cut out of the mountain, which starts right at the foothills, at Vani and goes all the way to the mountain. 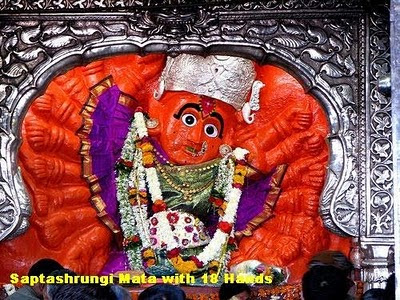 This temple is one among the 51 Shakti peethas located on the Indian subcontinent. The Devi is said be swayambhu (self-manifested) on a rock on the sheer face of a mountain. She is surrounded by seven (sapta-in Sanskrit) peaks (shrunga-in Sanskrit), hence the name- Sapta Shrungi Mata (mother of the seven peaks). The image of the Devi is huge-about 10 feet tall with 18 hands, holding various weapons. The idol is always coated with Sindoor, which is considered auspicious in this region. 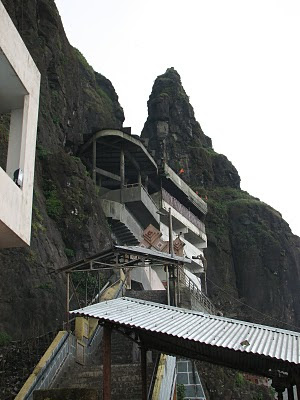 Now, a motorable road has been built, which goes up to an altitude of 1150 meters. From that place one has to climb only 500 steps to reach the shrine, which only takes about forty five minutes.

It is beautiful place surrounding with hills and lake

The steps We counted are 563