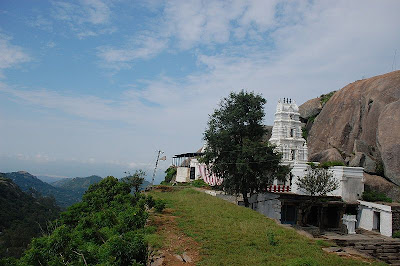 It is 65 km from Bangalore, Karnataka India, by road on Tumkur road. The nearest railway station is 25 km away in Dabbaspet.

Devarayanadurga is a hill station near Tumkur. The rocky hills are surrounded by forest and the hilltops are dotted with several temples including the Yoganarasimha and the Bhoganarasimha temples and an altitude of 3940 feet. It is also famous for Namada Chilume, a natural spring considered sacred and is also considered the origin of the Jayamangali river. Another famous temple in the area is the Mahalakshmi Temple at Goravanahalli.

Under the Hoysalas, there seems to have been, on the hill, a town called Anebiddasari or the precipice where the elephant fell. A rogue elephant, which the sthala purana describes as a Gandharva suddenly appeared before the town to the great consternation of the people and after doing considerable mischief, tried to walk up the steep rock on the west, when it slipped, fell back and was killed. The hill is accordingly called as Karigiri in the Puranas.

Under the Vijayanagara Kings, the use of the same name continued, and a large tank, named Bukkasamudra, was formed after throwing an embankment across the gorge from which the river Jayamangali has its source. Remains of the embankment and of the adjacent town can still be traced.

BhogaNaraishma temple is at the base of the hill and Yoga Narasimha temple is on top of the hill. The vehicles can go a good 2Kms through the zig zag road towards the top. But to reach the temple one has to climb a good few hundred steps. Here again we can have a quick look at the temple, the temple is good and we had a good time there. 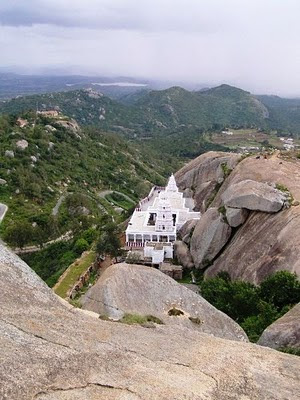 On the third elevation stands, facing east, a temple of Narasimha, known as the Kumbhi. This Narasimha temple consists of a Garbhagriha, a sukanasi, a navagraha and a mukhamantapa and is similar to the plan of the temple below. In addition to the temple there are three sacred ponds or Kalyani here known as Narasimha-teertha, Parasara-teertha and Pada-teertha.

There is also another temple, said to be older than Lakshmi Narasimha swamy, dedicated to Hanuman, also known as Sanjivaraya, who stands with folded hands.

Higher up above is a small shrine of Garuda.

Legend has it that the devotees of Hindu temples used to perform the ritual of circling the hills on which the temples were situated. As an effort to revive the practice, a large number of Devotees perform the Giri-pradakshina

Car Festival: Devarayana Durga Sri Bhoga Narasimhaswamy jathra/Car festival, an annual Car festival is held during Phalguna Masa shuddha poornima day some where in the Month of March/April in Devarayanadurga. On this day the chariot/car/Ratha of Sri Bhoga Narasimhaswamy is drawn in the main Ratha beedhi of the hill town. The festival draws devotees from all over Bangalore-Tumkur and surrounding region.

Narasimha Jayanthi: Devarayanadurga Sri Lakshminarasimhaswamy's Narasimha jayanthi, an annual celebration of Narasimha avathara day takes place during Chaitra Shudha chathurdashi (May month) at which thousands of people gather and many pendals are built to serve then with summer drinks like Panakam, buttermilk, phalamruth and free feeding is done to all devotees coming for the darshan of lord.

At the base of the hill on the road leading to Tumkur, is a place called Namada Chilume (chilume means spring). Myth has it that Sri Rama on his way to Lanka halted here. As he did not find water anywhere around to wet the "Nama" (a kind of paste Hindus apply on their forehead), he shot an arrow into the ground, and a spring sprang and thus the name (Rama)-Namada chilume. The spring can be still seen, and there is a foot impression of Lord Sri Rama near that.

great place to go.. quite close to bangalore.. i had a great time there..
http://livingismyright.blogspot.com/2011/05/devarayanadurga-hill-temple.html