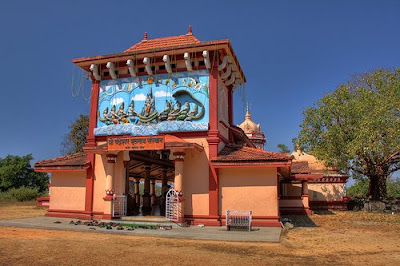 According to an ancient Sanskrit inscription, a temple has stood on this magical spot for nearly 2500 years. However, the present building, dedicated to Shiva, is comparatively modern, dating from the late 1600s. The only part of the shrine that is definitely a vestige of the Vedic age is its cavernous inner sanctum, hollowed from a hug back bolder, around which the site's seventeenth-century custodians erected a typically Goan-style structure, capped with a red-tile room and domed sanctuary tower.

The temple is associated with the Bhoja dynasty who were the rulers of the region till the 8th century. Also from the Bhoja's family deity, Lord Chandreshwar the name of their capital Chandrapur (today's Chandor) was derived. 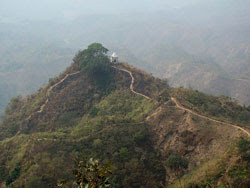 One can reach the Chandreshwar temple by the granite stone steps from the hill's base or by a drive up over a metal led road. The temple situated 350 meters above Chandranath Hill. It can be reached by climbing the huge granite steps. The main approach to the temple is metalled road and you have to enter the temple by alighting these granite steps. The whole place is strangely infested by small rock crabs.

Pilgrims arrive the main entrance for darshan, or the ritual viewing of the God. A wild-eyed golden Chandreshwar deity, Shiva as "Lord of Moon", stares out from an ornately decorated sanctum, wrapped in brocaded silk.

The presiding deity of the temple is Shri Bhutnath or Chandreshwar whom the Bhoja kings regarded as the titular deity. The Bhoja kings ruled South Goa before the Christian till the middle of 8th century. And in fact they named their capital Chandrapur after the deity. 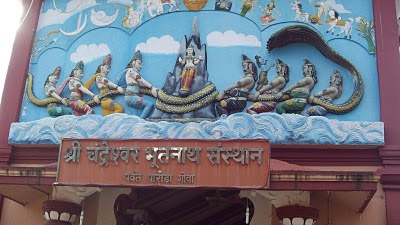 In the Shri Chandranath Temple At Quepem in Goa , you will find the Shiva Linga carved out from the rock. The surprising and most amazing fact is that on full moon night, water oozes out from the Shiva Linga whenever moon light falls on it and temple is so designed that Shiva Linga receives moonlight on every full moon. Scientists suggest a meteorite fell on Chandranath Mountain during the pre-historic period.

Next door, a smaller temple is dedicated to Chandreshwar's attendant deity, Bhootnath who is the lord of ghosts. The temple's ancient chariot is well known for its wood carvings. The tree temple chariots are housed by a corner building. A palanquin procession of the deity is held every Monday evening wherein food is offered to the devotees.

The main festival here is the five-day Hanuman Jayanti, along with Dushera and Mahashivratri.

Parvathi and elephant-headed Ganesh respectively, sculpted in stone - are housed in small niches to rear of the shrine. The circumambulatory passage, which has to be walked around in clockwise direction, hugs the base of the boulder that forms the temple's heart A small Nandi Bull lies among there from which the view west out to sea and south across the Assolna estuary to the Cabo Da Rama headland can be seen. 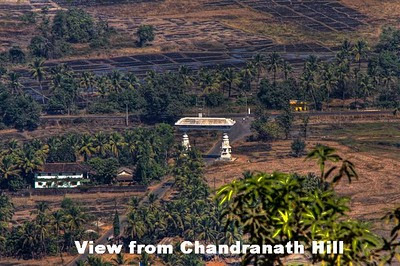 Great informations.... Thanks a lot.

Good information from your blog, i wish to visit Chandreshwar Bhootnath Temple in my next trip to goa