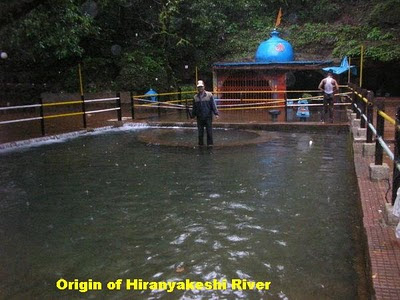 Name : Hiranyakeshi Uppam (temple) is a place from where the Hiranyakeshi River springs originated from the mouth of caves.

Hiranyakeshi Temple is located at Amboli in Sindhudurg District of Maharashtra. It lies at the origin of Hiranyakeshi River. 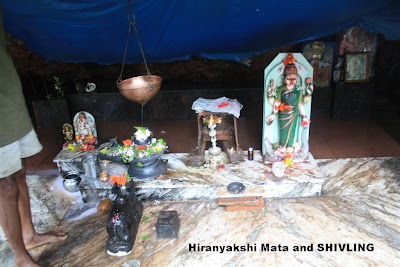 The river Hiranyakeshi originates from a cave adjacent to the temple of Goddess Parvati at the foot of a mountain. Water rushes out with tremendous force to fall into a squarish tank or ‘Kund’, from where it flows out. Hiranyakeshi temple houses a Shivling, Ganapati idol and of course the Hiranyakeshi Devi idol. Hiranyakeshi is name of Mata Parvati, the one with Golden hair, Hiryana being Gold and Kesh means hair. The temple is said to house a natuarally created shivlingam (Swayambhu)made of red stone. However this lingam cannot be seen as it is covered by another Shivlingam which is used for daily offerings and prayers. There is also a statue of Mata Parvati with golden colour hair.

This River came from DEER like Statchue. In Sanscrit DEER called as HIRAN. So name Hiranyakeshi. 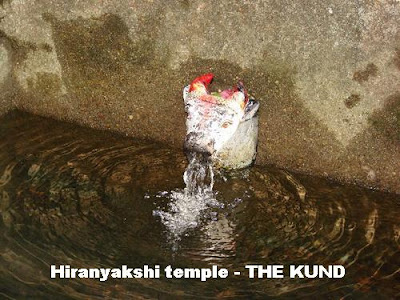 The nearby Maruti Mandir was built by a holy baba from Goa. The Hiranyakeshi is a Purvamukhi River means east facing,the river Hiranyakeshi flows eastwards. Fishing can be enjoyed at the river. Its flow around 80Km and then joins the Ghataprabha River.

Next to this temple, there is an entrance to a cave which is not safe to enter in the monsoons when it becomes a safe harbour for a lot of creepy crawlies. 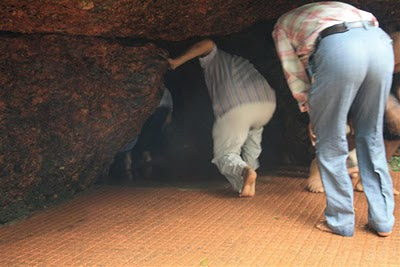 Local people say that an expeditiation was held in 1981 a seven member team from Pune which revealed that there are seven water Kunda (pond)behind the temple and after that there is also a cave which can accomodate 200 people. The place is a delight for natural beauty lovers. The area is covered by dense forests and you can even spot some rare breed of birds in this area. 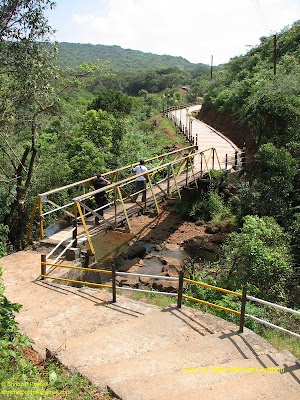