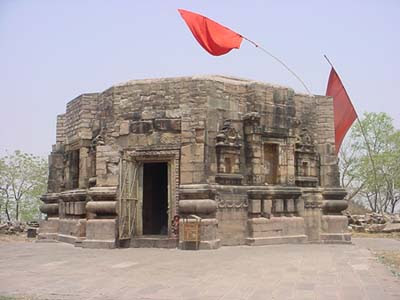 Mundeswari temple is located 10 kilometres from the small town of Bhabhua, 120 kilometres from Varanasi and 175 kilometres from Patna in Bihar. This temple, one of the earliest specimens of Nagara temple architecture in Bihar, situated at a village Ramgarh on a 600 feet high hill.

As per the prevalent version, the temple was built in the period of 3-4 BC with the Narayana, or Vishnu, as the presiding deity. The statue of Narayana has disappeared due to the ravages of time. During 348 AD, a new deity Viniteswara was set up as a minor deity in the temple, holding a subsidiary position to Narayana, the main deity.

Around the seventh century AD, Shaivism (Religion based on Lord Shiva) became the prevalent religion and Viniteswara, which was a minor deity, emerged as the presiding deity of the temple. The Chatur Mukhalingam (Lingam with four faces) representing him was accorded the central place in the temple, which it holds even now.

After this period, the Cheros, a powerful aboriginal tribe and the original inhabitants of the Kaimur hills, ascended to power. The Cheros were worshippers of Shakti, as represented by Mundeswari, also known as Maheshmardini and Durga. Mundeswari was made the main deity of the temple. However, Mukhalingam still occupied centre stage in the temple. So the image of Durga was installed in a niche along one wall of the temple, where it resides to this day, while the Mukhalingam survives as the subsidiary deity, though in a central position.

Situated atop the Kaimur Hill (608ft), the temple is in an octagonal shape. Since the temple buit in 3century B.C. rituals and worship have been taking place at the temple without a break. Thus making it one of the oldest functional temple in the world. 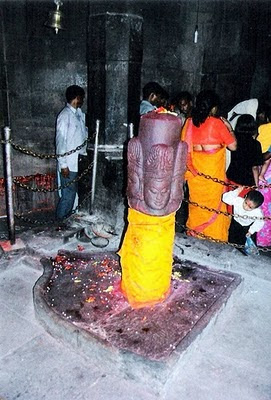 On entering the door, the pride of place is held by a lingam with four heads in the centre of the temple. This is the “Chatur Mukhalingam” which represents the Viniteswara , said to be set up in 348 AD by Dandanayaka Gomibhata. 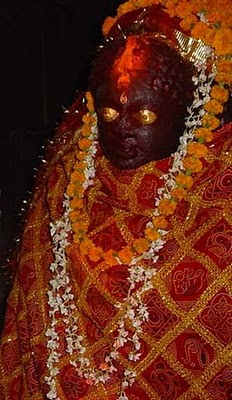 To the right of this central statue is the presiding deity of the temple, Durga or Maheshmardini with ten arms and riding a buffalo representing an Asura. This is unique in itself, as generally Durga is represented as killing the ‘asura’ in the form of a buffalo. There is exemplary lattice work in stone on the window nearest the door and a variety of figures of dancers and musicians on the front temple door.

The clear indication that Shiva and Shakti were worshipped here is also an indication that the temple might be part of the Tantric cult which is quite popular in the Eastern part of India.

Apart from Shiva and Shakti, the temple also has idols of other popular gods in the Hindu pantheon including Ganesha, Surya, Vishnu and Mother Goddess. Temple materials and idols can be found scattered near this very rare octagonal shaped temple. 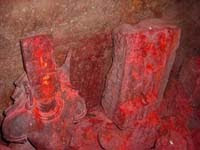 Experts believe that the temple was built during the Shaka Era. Interestingly, the present caretaker of the temple is Muslim, yet another example of the religious harmony same as we can see in Amarnath yatra.

Various steps have been taken to improve the area in recent times. Of great interest is the museum built halfway up the hill on a small peak by itself. This museum, being new, is a small island of excellence, a clean, sparkling building with the paint still fresh on its walls. It has one big hall and an additional smaller room. The big hall has a collection of various statues and rock carvings mostly dating to the 6th and 7th centuries AD. It contains figures of religious significance drawn through the ages. The sculptures are well labeled but need more exhaustive descriptions regarding the significance of the exhibits. The smaller room has a large number of photographs of the rock paintings of the stone age period found in and around Karar village in the Kaimur Hills. Due to lack of space, some rock sculptures are languishing in the open space encircling the museum.

The temple attracts devotees during festivals like Ramnavami and Shivratri. People from these districts flock to the temple regularly all round the year. Of particular significance is the period of Navratra when thousands of people from the Rohtas, Gaya, Aurangabad, Bhojpur, Varanasi, Mirazpur and surrounding districts of Bihar and Uttar Pradesh districts come to the temple and a mela is held. During this period, the temple and the area around the hill is a riot of colour. 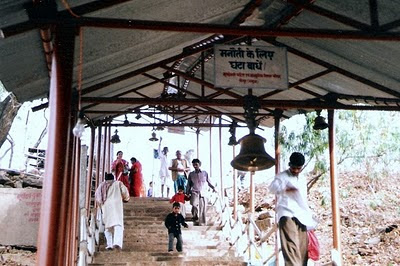 The guest house at the base of the hill, the concrete road up the hill, the sodium vapour lamps lighting up the temple and the hill road in the night and the market complex built for the mela have brightened up the whole environment recently.

Mr Rajesh,
Thank you for adding a few of my photos of Mundeshwari temple inyour blog. Please let me know if you need any further details.
Thanks
Arun Sinha
arusinha@gmail.com

i'm delighted to c the spirit of u kaimurians in spreading the basic knowledge-value of heritages in kaimur.