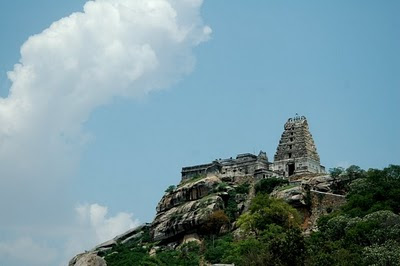 This temple is located at Polur. Polur is situated on the state highway between Tiruvannamalai and Vellore district. It is about 33 Kms from the former and 48 Kms from the latter and 55 Kms from Vandavasi.

1. Lord Narasimhar invited two brothers namely kolasthiyar Rushi and Pulasthiyar Rushis to this temple. These two rushis were ardent devotees of Lord Narasimhar. These two sages did penance to lord Narasimhar and the lord was impressed by their devotions. Impressed by their bakthi, lord gave them a mango. A fight broke up between the two brothers as who would take the mango. In the spur of the moment, Pulasthiya rushi chopped his younger brother Kolasthiyar’s hands. Even after losing both hands Sage Kolasthiyar continued to worship the lord with great devotion. He took bath at ''seyyar'' (3kms from polur) for 48 days (i.e. 3 mandalams) and circled the SampathGiri. After 48th day, Kolasthiyar's hands reappeared magically! This not only surprised the sage, but also others present. It was Lord's plan that Ustavmurthy should be installed by Kolasthiyar rushi. Lord came in Kolasthiyar rushi's dream and gave direction as where the uthsava murthy was. It was in a place called Karapoondi in seyar. The sage went to look for the utsavamurthy with the direction given by the lord. He found the uthsava Murthy and established a temple i.e. down the hill.

2. A group of workers were breaking down stones on a hill called Sampath Giri  in Polur village in Thiruvanamalai dist. of Tamil Nadu. Workers were busy doing their job. One of the workers sphear hit a rock, and for everyone’s shock it started bleeding. They were frightened and left for the day. One the same night, Lord Narasimhar showed in one of the devotees dream. Lord Narasimhar said that he has come one his own to sampathgiri as shantha Murty. Next day, the devotee informed this to the villagers. All villagers came to see the idol. They were all shocked to see the lord bleed. All the villagers came together and built a Maha Mantapam for the lord Narasimhar. They worshiped the lord with great bakthi and shraddha. A temple was built atop of the hill for lord Narasimhar. Later people installed Lakshmi- the consort of Lord Narasimhar.

The hill is called Sampathgiri and the main deity is the Swayambu Sri Lakshmi Narasimha Swamy facing south towards Thiruvannamalai along with Kanagavalli Thayar. Sage Pulathia Brahma worshipped here. Achutha Thasar, Sri Gnanananda Swamigal and Siddhar Vittoba had meditated in caves here. 2 water streams (sunais) are present. There is an Anjaneyar shrine at the base of the hill and there are 840 steps to climb. 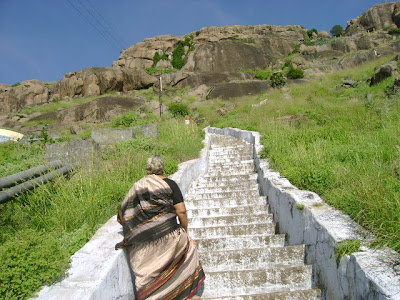 There is a cave here called ''Annai Guha'' this cave was used by many spiritual leaders like vittobha, Hari das to meditate. There are two tanks here. One in the top of the hill called Bramha theertham and the other at the bottom called Punasthiyar Theertham. There are two vultures that fly around the hill and people believe that they are the two brothers Kulasthiyar and Pourshtriyar. The hill which is opposite to Sampatha Giri is called Sapthagiri and it is believed that the 7 sages still reside in this mountain. This temple is completely built by devotees after lord showed up in their dreams. This place is very powerful and all the prayers are answered in no time. The temple festival is celebrated according to Kamakshi temple of Kanchi. 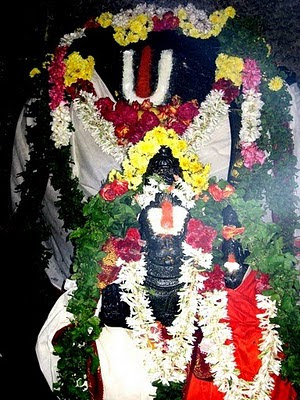 The temple is currently served by a single priest called Sekhar Bhattachariar who also looks after a small Perumal temple below. He goes atop the hill at 4:30 AM and returns back by 8:30 AM. A Chowkidar remains on the hillock opening the temple for visitors who come later. The priest also visits the hill atop temple in the evenings.

Could you please suggest a good place to stay at Polur?
R Subramanian