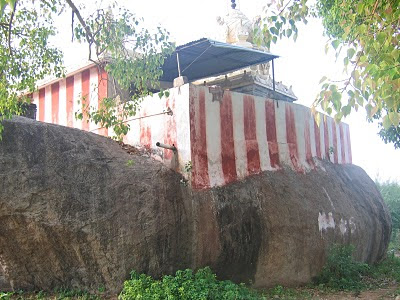 Anthili is a village about 2 kms south of Arakanda Nallur on the banks of the river South Pennai.

Lord Maha Vishnu in the form of Narasimha came out of a granite pillar to kill Hiranyakasibu, the father and the tormentor of Prahalad. In this avtar, the Lord rushed to help Prahalad without calling his vahanam, Garuda. So also in Gajendra Moksha. These caused much anxiety to Garuda who felt extremely depressed on being left out. He left Vaikuntam and was doing penance at Anthili. The severe penance of Garuda pleased the Lord and He gave dharshan as Lord Narasimha with Mahalakshmi seated on his lap. Due to Garuda’s penance.

Garuda immediately cooled down on seeing his Lord once again, especially in the Narasimha form which he had missed earlier as he did not accompany the Lord at the time of killing Hiranya kasibu.

He requested the Lord to remain here in this cool form (shantha roopi) and provide darshan to all devotees. Also, having missed taking him on the trip to kill Hiranya, Garuda sought the opportunity now to carry the two of them around this place.

An overjoyed Garuda is said to have taken them around Thiru Kovilur, Mugaiyur, Arakandanallur and Paranur, among others.

Pooja is performed at this temple as per Madhwa Sampradaya. Some of the sculptures inside the temple seem to indicate that there may be a Karnataka connection to the construction.

Being aware of the importance of this place, Sri Vyasaraja Theertharu ( Sri Raghavendra Swamy in his previous birth) visited this place and spent some time here. To mark his visit, he has installed an idol of Sri Anjaneya Swamy. Sri Vyasaraja has installed over 729 hanumans at  places he visited. At all these place, he drew the image of Hanuman on a stone using Angaram and the impression became a sculpture.

http://aalayamkanden.blogspot.in/2010/09/andhili-lakshmi-narasimhar-temple.html
Posted by Rajesh. CTR at 12:47:00 AM