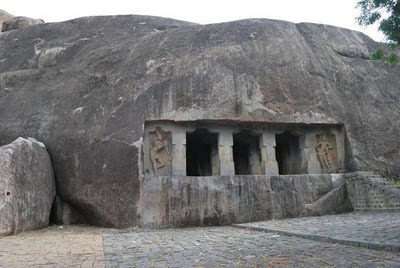 This shrine, called the Trimurti Temple, is generally considered as the first of the Pallava cave-temples and was commissioned by Mahendra I in the early 7th century on a 100ft hillock. The Pallava temples along with a similar group by the Chalukyas of Badami represent the earliest Hindu stone temples in southern India. The temples were a significant architectural innovation as they marked the transition from wooden structures to stone. An inscription on the temple calls it the Laksitayatna and dedicates it to Brahma, Isvara, and Vishnu. “Mahendravarman showed leanings towards Jainism before he gravitated towards Hinduism — which is probably why one finds Jain settlements near his cave temples.

Steps at the end of a wide stone courtyard lead up to an uncovered porch before a simple rectangular mandapa with four massive equidistant pillars. The pillars of the mandapa facade have square bases, octagonal central sections and square capitals with curved corbels. Inside, another row of similar pillars divides the mandapa into three aisles. The aisles lead to the Trimurti shrines, deep plain niches cut into the rear wall. 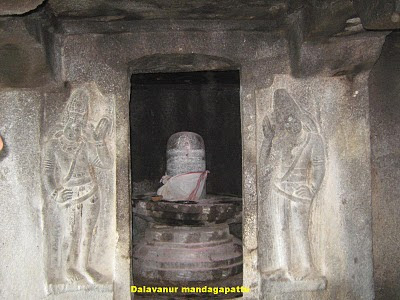 At Thalavanur, close to Mandagapattu, The central mandapa pillars have large medallions carved on each face of the square sections at the base and top. Steps lead to the entrance between these pillars. Above the entrance is an elaborately carved lintel. The temple houses door guardians flanking a linga. Above this, a gently curved eave has a row of equally spaced candrasalas with carved faces. On either side of the mandapa facade are deep niches with gently-leaning Dvarpalakas.

A small flight of rock-cut steps carved on the hill takes us to the shelters of Jain monks who probably meditated and rested there.

http://ramanchennai.wordpress.com/category/archaeology-history/
Posted by Rajesh. CTR at 1:28:00 AM

Mandagapattu and MITTA MANDAGAPATTU ARE NOT SAME PLACE. MANDAGAPATU IS THE PLACE THAT FIRST ROCK CUT TEMPLE LOCATED.