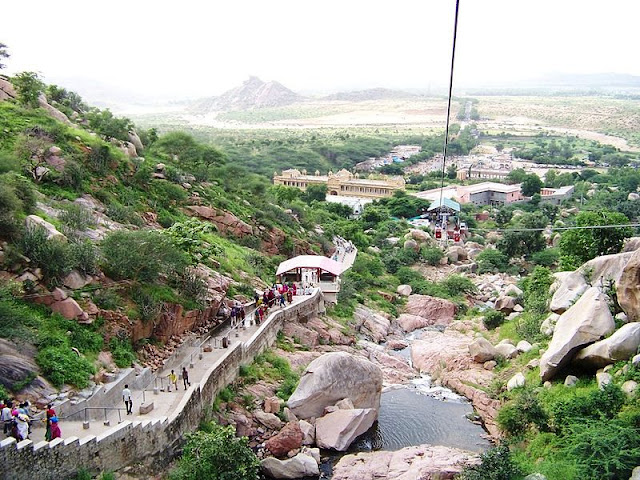 Sundha Mata temple is a nearly 900-year-old temple of Mother goddess situated on a hilltop called Sundha, located in Jalore District of Rajasthan. It is 64 km from Mount Abu and 20 km from the town of Bhinmal.

In ancient days worship in this temple was done by "Nath Yogi's". Emperor of the Sirohi district gave land of the "Sonani" , "Dedol" and "Sundha ki dhani" villages to one of the Nath Yogi Rabad Nath Ji, who worshiped in Sundha Mata Temple at that time. After the death of one of the Nath yogi Ajay Nath ji, no one was there to do the worship so Ram Nath ji (Aayas of Mengalwa that time) was taken there to take the responsibility. The land of Mengalwa and Chitrodi villages were given to these Nath Yogi's in ancient days by king of Jodhpur Maharaja Jaswant Singh. So Nath yogi of Mengalwa were called as "Aayas". After the death of Ram Nath ji, Badri Nath ji, pupil of Ram nath Ji became Aayas at Sundha Mata temple and took the responsibility of worship. He also looked after land of "Sonani" , "Dedol" ,"Mengalwa" and "Chitrodi". As the time passed, no one was there to do all the management, so a trust (Sundha Mata Trust) was created to look after temple and manage tourism.

At 1220 m height in the Aravalli ranges there on Sundha mountain is temple of goddesses Chamunda Devi, a very sacred place for devotees. It is 105 km from district headquarters and 35 km. from sub divisional Bhinmal. This place lies in Raniwara Teshil in the mid-east of Malwara to Jaswantpura Road near Dantlawas village.

Many tourists from Gujarat and Rajasthan visit it. The environment here is fresh and attractive. The waterfalls flows year-round and the hotel at the valley made of yellow sandstone of Jaisalmer attracts everyone. 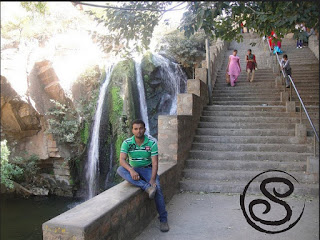 Sundha temple is made up of white marble, the pillars reminds of the art of Abus’s Dilwara temple pillars. A very beautiful idol of goddess Chamunda stands under the huge stone. Here Chamunda’s head is worshipped. It is said that the trunk of mother Chamunda are established in Korta and legs in Sundarla Pal (Jalore). In front of mother Chamunda a BhurBhuva Swaweshwar Shivling is established. In the main temple a duo idol of Shiva and Parvati Ganesh’s idol are considered very old and extinct.

Recently, a ropeway service has been started to climb Sundha Mountain, to make the journey easier for pilgrims, making it a memorable experience. Ropeway (Udan Khatola) to the temple—first in Rajasthan—is ready, Rs 124 for both ways. 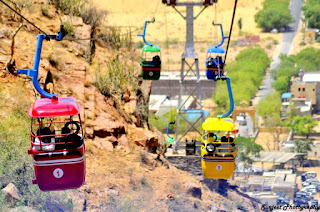 During Navratri tourists from Gujarat and nearby areas come in a large numbers. Regular buses are run by Gujarat roadways from Palanpur, Deesa and elsewhere during that time.

https://en.wikipedia.org/wiki/Sundha_Mata_Temple
Posted by Rajesh. CTR at 9:12:00 AM