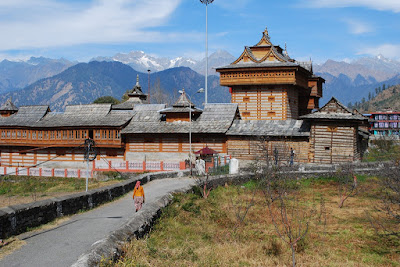 The temple is situated about 180 km from Shimla and is one of 51 Shakti Peethass. The town Sarahan is known as the gate way of Kinnaur. Down below at a distance of 7 km from Sarahan is the River Satluj. Sarahan is identified with the then Sonitpur mentioned in Puranas.

Legend :
According to a legend, the manifestation of the goddess is reported to the Daksha-Yajna incident when the ear of the Sati fell at this place and became a place of worship as a Pitha - Sthan. Presently in the form of a virgin the icon of this eternal goddess is consecrated at the top storey of the new building. Below that storey the goddess as Parvati, the daughter of Himalaya is enshrined as a divine consort of Lord Siva.

The Bheemakali Temple, reputed to be at least 800 years old, is dedicated to Goddess Durga or Bheemakali and is considered one of the significant Shakti Peeths of Shaivite Hindus. The temple is Tibetan in its architectural style, with Buddhist and Hindu influences and bronze statues of both religions in the shrines. It has slanted slate roofs, golden towers, pagodas and a carved silver door. Dussehra is celebrated in a grand way at both the BheemakaliTemple and in the village of Sarahan , with animal sacrifice playing a big role in the festivities.Bheemakali Temple regarded as one of the fifty one sacred Shaktipeeths. The temple complex has another three temples dedicated to Lord Raghunathji, Narsinghji and Patal Bhairva Ji (Lankra Veer) - the guardian deity.

A marvelous example of hill architecture, the temple complex at Sarahanis set against the incredibly beautiful backdrop of high ranges and forested slopes. Built in a mixture of the Hindu and Buddhists styles, it was the temple of Bushair rulers of Rampur (Shimla). The palaces of the royal family are adjacent to the temple. From Sarahan there is a view of the Srikhand Peak , revered as the home of goddess Lakshami.

Websites:
https://en.wikipedia.org/wiki/Bhimakali_Temple
Posted by Rajesh. CTR at 8:08:00 AM