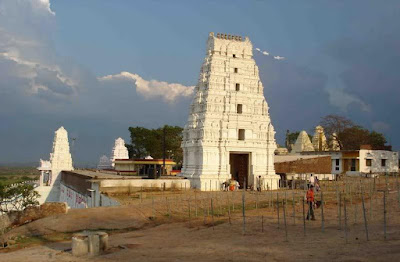 Keesaragutta Temple is a Hindu temple dedicated to Lord Siva and his consorts Bhavani and Sivadurga at Keesaragutta in Rangareddy district. It is about 40 km from Hyderabad and 10 km from ECIL. It is located on a small hillock.

The temple draws thousands of devotees on Shivaratri Legend has it that Sri Rama installed the Siva lingam here to atone for the sin of killing Ravana, a Brahman. He selected this beautiful valley surrounded by hills and verdant greenery for the purpose and ordered Hanuman to bring a Sivlingam from Varanasi. Hanuman was late in arriving with the Siva lingam and as the auspicious hour was nearing, Lord Siva himself appeared before Sri Rama and presented a Sivilingam for installation. Hence the lingam in the temple is called Swayambhu Linga. It is also called Ramalingeswara as lord Sri Rama had installed the lingam.

Hanuman returned with 101 lingams for selection from Varanasi and felt aggrieved at not having his lingam installed. Hence he threw them all over the area. Even to this day several lingams are found scattered all over the place outside the temple. To mollify Hanuman, Sri Rama ordained that precedence would be given to him for worship at the temple. He also said that the hillock where the lingam was installed would bear his name kesarigiri i.e., Hanuman, the son of Kesari. Over a period of time, it has colloquially transformed and is now known as Keesara and the hill as Keesaragutta. Ever since, the rituals follow the command of Sri Rama. 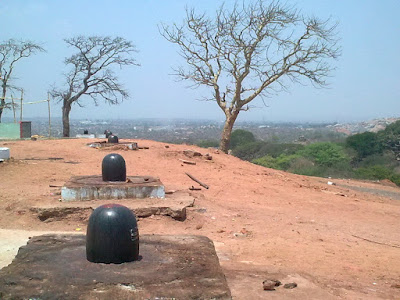 Archaeological Excavations :Exploration and Excavations were conducted by the archaeological department in the surroundings of Keesaragutta Temple. Many Remnants of Brick structures and Shiva Lingas were found on the Hill north of the temple and a hillock near the water resource. The remnants belonged to Chalukyan Empire reign. Fortification walls, Yaga shala and Prayer hall's were excavated here. Some Vestige remnants and rock cut cisterns were found on the hills as an indication of Jainism and Buddhism Flourished contemporarily. On October 18, 2014, twelve idols of Jain Tirthankara dating back to the 4th-5th century were found near the temple steps at a depth of one foot which proves that Jainism co-existed along with Hinduism at Keesaragutta during the time of Vishnukundins in 4-5th century. But since 60 to 70 years thatakam family is working hard to develop the temple, and they are the founder trustees of the temple now.

The temple is a near 1.5 Hr to 2 Hr drive from the city. When we were traveling, it was raining and the drive was very pleasant. How to reach Keesar
The village is in Rangareddy district of Andhra Pradesh and is located about 18 km from ECIL X roads on the out skirts of Hyderabad (and about 45 km from Begumpet airport).
Keesara is a Town in Keesara Mandal in Rangareddy District in Andhra Pradesh State in India. Keesara is Main Town for the Keesara Mandal. Keesara is 75.9 km distance from its District Main City Rangareddy. And 35 km distance from its State Main City Hyderabad. Keesara is about 35 kms from Hyderabad. It has proper roads and driving direction is pretty easier. Andhra Pradesh state run APSRTS offers bus services from Jubilee Bus Station, Secunderabad and Imliban bus station and Koti.