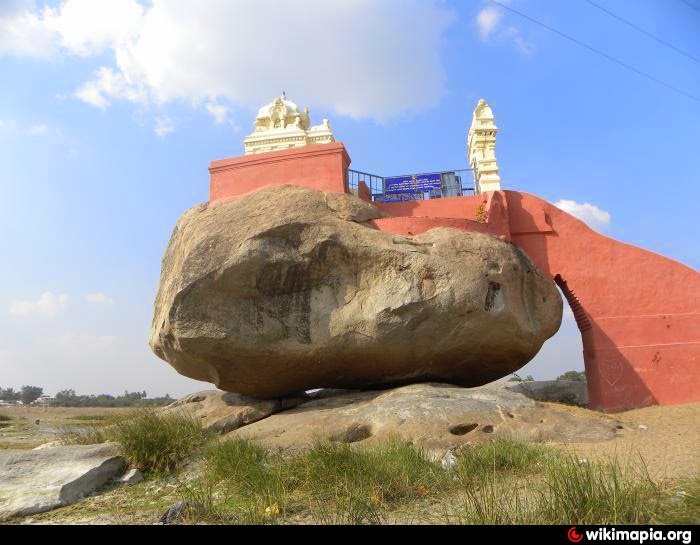 East of the Tirukoilur has the Sivan Temple situated on the banks of River Pennar. Near to the temple on the banks of the river, there exists Kabilar(Saint) Kundru (tiny mountain).

Kapilar (Tamil: கபிலர்) was refliterature Sangam poet. He was a contemporary of Karikala Chola, Irunkōvēl and Vēl Pāri. He was the close friend and confidant of Vēl Pāri, one of the Vēlir kings. He was born in Thiruvadhavur in the Pandyan Kingdom. Initially a poet at the Pandyan court, he would leave at an early age and show his talent at various places before finally ending up at the court of Vel Pari.Kapilar would hear about the generosity and virtue of Vēl Pāri, a powerful Vēlir King who ruled over Parambu nādu, a heavily fortified kingdom that comprised about 300 villages, and pay him a visit. They would go on to become the thickest of friends. He would be his confidant and stay with Vēl Pāri until the latter's last breath.
During this period the three crowned Tamil kings were in the process of expanding their empires and turned the independenet Velir chiefs into sub-ordinates or eliminated them. When the three crowned Kings besiege the kingdom of Parambu, Vēl Pāri a warrior like no other will refuse to bow and face them head on. Kapilar would sing some of the most notable poems in praise of his patron during this time. In the end, Vēl Pāri would finally be killed by treachery after defying them for years.

Kapilar, a true friend, would then take the two daughters (Angavai & Sangavai) of Vēl Pāri and go in search of appropriate grooms. He would knock on the doors of the other Vēlir kings and unsuccessfully plead with each before finally giving up. He would be let down each time as the other Vēls would fear retribution from the 3 crowned kings. The most notable of these encounters is when he sings to Irunkōvēl and the latter would throw an insult and shut the door on the great poet. He would finally leave the two princesses in the care of Brahmins.

The death of his friend will affect him so greatly that he would perform vadakirrutal, one of the Tamil acts of committing suicide. He would sit facing north and starve himself to death. The place where kabilar committed suicide by starving is now called as Kabilar Kundru.

It is one of the protected monuments in Tamil Nadu by the Archeological Survey of India.