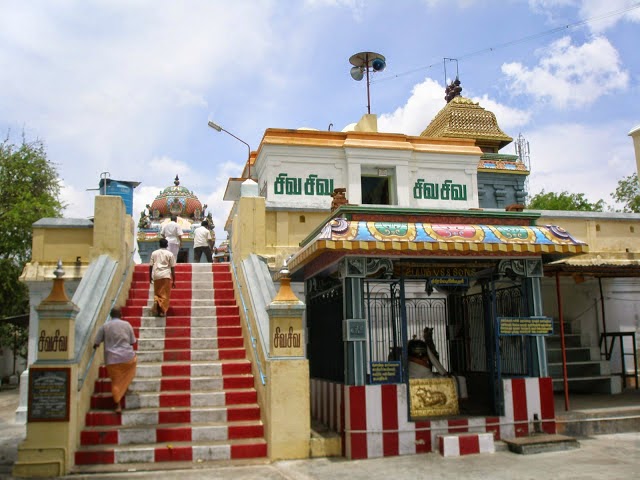 Vayu the God of wind and divine serpent Adisesha claimed supremacy of their prowess in the court of the Devas.  Adisesha covered the peaks of Mount Meru with his thousand heads.  Vayu could not shake the mount.  This created panic in the world and yielding to the appeal of Devas Adisesha gave in one peak.  Vayu shook the peak and took it to south when one small piece fell in this place, according to sthala purana.
The piece of the peak that fell here became a small mount which was earlier a plain.  The temple is believed to have been built on this mount.  Lord Shiva appeared here as a Tejolinga as the result of the penance of King Bruhadrajan in Krutha Yuga.  During the Dwapara Yuga Lord changed all Devas into bees to protect them from the harassment of demon Vruddhasura.  Lord also advised the Devas to make bee-hives in the sanctum and worship Him.  As bees worshipped here the Lord is named Madhuvaneswarar (Madhu in Sanskrit means honey), Mother as Madhuvana Nayaki and the place as Madhuvanam.  There are bees around the place even now but they do not harm anybody.

Lord Shiva in the temple is a swayambulingamurthy. All festivals mentioned above are organized by Sri Madhuvaneswara Swami Vazhipattu Kazhagam, a body devoted to celebrating all festive events.

Devas in the celestial world including their king Indira, Bruhadrajan had worshipped the Lord in this temple.  It is built on a land covering an area of 270 feet in length and 135 feet in width.  The 30 feet tall 2 tier Rajagopuram is facing east with five Kalasas.  Lord Shiva in sanctum sanctorum is facing east and Mother the south.

In a small hill within the temple are shrines for Lords Nardana Ganapathy, Somaskanda, Dakshinamurthy, Annamalayar, Brahmma and Mother Durga.  In the prakara down the hill are Lords Siddhi Vinayaka, Subramanya, Chandikeswara, Agastheeswarar, Brahmmapureeswarar, Bhairava and Saturn (Sani Baghwan), Sun God and Navagrahas the nine planets and Mother Mahalakshmi.  Lord Nataraja graces from a separate shrine near the sanctum.

Importance of this Temple :

It is believed that those bathing in the sacred spring in Masi Month-February-March and worship the Lord will gain all benefits in life and those worshipping on Ekadasi days-11th day of full moon or new moon days and pradosha days-13th day in both fortnights will reach Moksha-salvation.

This is one of the Mada Temples built by Chola king Kochenganan.  Yama the Lord Death in the south, Varuna the God of rains in the west, Indira in east and Kubera in the north installed Shivalingas in the place and worshipped the Lord.

Vaikasi Visakam in May June, Tirukarthikai in November-December and Margazhi Tiruvadhirai festivals are celebrated with procession of Lord. Other festivals are Guru Puja for Saint Sundarar in Aadi Swati star day in July-August; monthly pradoshams and Shivrathri and all Shiva related auspicious days.