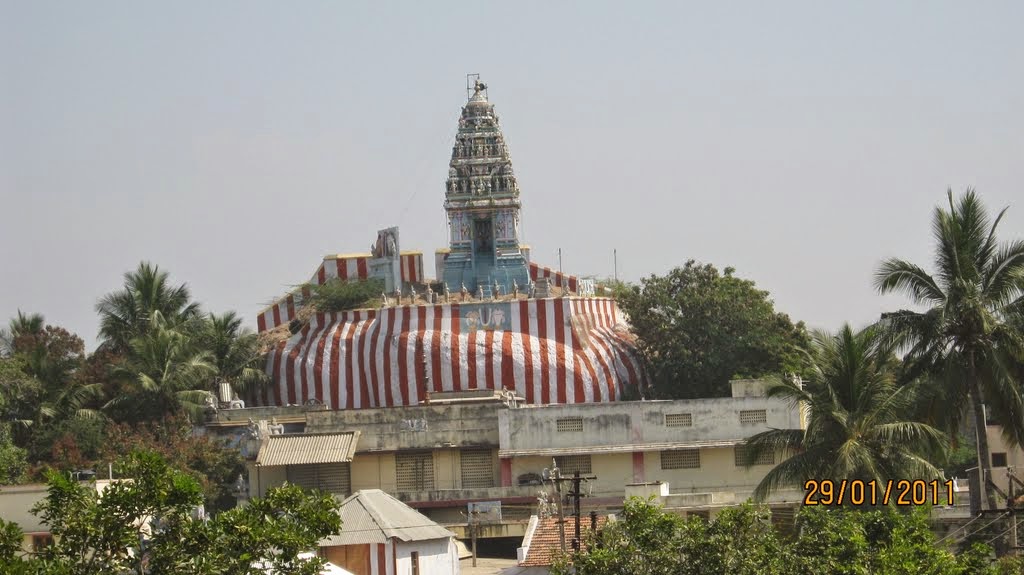 The Temple is on the top of a hill in Thanthondri malai situated around 5km from Karur, Tamilnadu.

A devotee Susharma by name was proceeding to Tirupathi with his wife seeking child boon and stayed on the banks of Cauvery for a break.  Sage Naradha appeared in his dream and directed him to go to a place called Tirumakudalur where some would receive him.  When Susharma reached the place, some sculptors received him and took him to this place.  There appeared a bright light on a rock.  The rock split.  Perumal appeared from the gap and granted the boon sought by the devotee and chose to stay for every here for the benefit of devotees.  It is also said that this is the place where a bit of Tiruvengada hill fell during a contest between Vayu and Adhisesha. Antiquity of the temple : 300 years.

Lord Perumal of the temple is a swayambumurthi on a big rock in a standing posture. Devotees offer sandals as contribution to the temple. This is a cave temple.  The temple celebrates a strange event.  Lord Perumal will appear in the dream of some elders belong to cobblers making chappals.  He will tell one of them to get a chappal of his size either for the right or for the left foot or for both.  These people will prepare the chappal to Lord’s foot size and carry it as jesters and submit it to Perumal.  This is called Chemmali Samarpanam.
The temple is 300 years old.  Presiding deity is formless.  Mother Mahalakshmi is on the chest of Lord.  The place is praised as Dakshina tirupathi-Tirupathi of South.  As in Tirupati, there is no shrine for Mother-Thayar.

Devotees pray to Perumal for cure from pimples and scars in the body by placing salt, pepper and jaggery in the temple. They also pray for wedding and child boons.  Lord responds without fail to prayers of the devotees regarding their health problems.