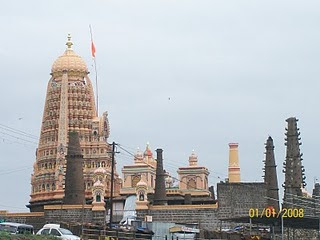 Atop the hill there is The temple of Lord Mahadev is located atop a Hill in Shingnapur. Shingnapur is located on the niche of the Shikhar Shingnapur hills, 40 miles away from Satara and is a famous pilgrimage center in Maharashtra.

The devotee called Somaya requested Lord to come his village, Harani, Taluka Purandar, District Pune which nearly 30 kilometers from Karanje. Lord Mahadev Mahadev (Shiva) accepted the request. The Lord told the devotee to build his temple at such a place that he can see his temple of Shikhar Shinganapur located in Satara district nearly 90 kilometers from Harani.

But there was already ancient open temple of Mahadev in village Harani which is now called as Old Mahadev where already goddess Haranai was staying.

She annoyed and tried to leave the hill but Lord Mahadev tried to stop her but she disappeared in the earth immediately. There are footprints of godess Haranai on the rock of the hill. Her small temple is also established on the top of the hill. The hill is called hill of Mahadev (Mahadevacha Dongar)

There are about 10 decendent families of the devotee, they are called as Bhagat. Every year one family Bhagat has right to do service of god. The bhagat or his any family member washes the Pind and ling of Lord Mahadev every day. There are two lingas in the pind, one of god Mahadev and other of goddess Parvati. There are also small other temples on the hill. There are two temples of Lord Bali at the foot of the hill.

The annual fair called Yatra in local language is held every year from Chaitra Shuddha Ekadashi to Chaitra Shuddha Pornimaa. The period is somehow closer to month of April. There are five prestigious Kawadees ( manachya kawadee) and other about 20 small kawadees of every big family called kul or wada. Ordinarily one person of every family is server of kawad called kawadya.

On Ekadasi ,the first day fair, there is bath of kawad. The kawad is lifted by 6 kawadyas, 3 to front side and 3 to back side. Music of Halagi and daff is played by a person who is primarily held from Matang community, there may be other halagiwala daffwala. The kawad climbs the hill by fastening the strong rope to the kawad, other peoples help to pull the rope. Five rounds (pradakshinas) are done by the kawad,then water from the vertical bronze pot (gadava having capacity about 30 to 50 liters)is spred on the pind of Mahadev from outside of the temple or some devotee prefer to go inside the temple. The kawad halts there for a night and in the morning, all the 5 and other samll kawadees come down in the village. There dance in the front of temple Lord Vitthal Ruhkmini for about half to one hour,then the kawad is kept for during day in the house of the owner of the kawad.

On the second day of Dwadashi, same programme is performed but there meal to kawadyas given by the owners of the kawad. On the third day also same program is performed but on that day, there is tamashaa for entertainment of the villagers. On fourth day , the all kawadees go the river Nira to bath and bring the water to bath the god Mahadev.On the route of river, there Laptalwadi where peoples of Laptalwadi offer the tea or sarbat to all the devotes. All kawadyas do bath in the river, bath is also done by the kawad except her shid which is covered by clothes called patakaas. There is aarti of Lord Ganesh after bath. Then kawad is lifted to go to Mahadev. There is music of halagi and daff. During the return journey, the meal of Zunka and Bhakri (roti) of jowar or bajra is given to all the devotee from the respective kawad owners. The kawadees come in the village about 3 to 4 pm.in Harani.

The water is thrown to the godess Kalubai, god Bhairavnath, godess Tukai ,Kanhabai, god Hanuman during the Pradakshina. Then all small and big prestigiuos kawadees perform the dance below the large tree of banyan for about two to three hours. During dance, there is also race to pull or to push the kawad between front three kawadees and rear three kawadees for fun. After tiring, the race is stopped. Again the same or other kawadyas lift the kawad and starts dancing in a manner to and fro for about 3- 4 feets. Almost all ladies, gents, children and guests come to see the dance.

During going to Mahadev, there is system to touch the body by kawadya other person along with kawad. Some persons may prefer sleep on the earth, then body touched by leg of all six kawadyaa in faith to avoid accidents and long life. In the evening, all kawadees go the Mahadev to offer water of river Nira. Kawadees halt there on the hill. Then after midnight of the fourth day i.e. early in the morning of fifth day about 2-3 am , all the kawadees come down in the village. There is ceremony called varat with Dhol Lezim sound and dance.

On this fifth day, there is programme of tamashaa till afternoon. After tamashaa, at the evening, there is programme of wrestling. The wrestlers from nearby villages come to play. This ends upto 7 pm. There is prize to winners. Sometimes there is draw of competition, then prize is distributed equally. In such a way fair is finished.

After fair 5 days , there is programme of fulfillment of navas starts. Navas is a method to offer god certain thing after fulfillment of the demand from god. In village Harani, the devotee may offer the god that, if his particular demand is fulfilled he will give meal of Puran Poli to all the villagers. The navas may be of one kawad or two or five kawadees. Water of river Nira or from Mahabaleshwar or river Krishna Dhom is offered. After fulfillment of demand from Lord Mahadev, the particular person who prayed for his demand does all the expenditure of kawad alongwith devotees to go river, meal,etc. The kawad / kawadees climb/s throgh Mungi Ghat which is very diffcult to climb with help of rope during evening. The Tirth offered to god. There are usual pradakshinas. Kawad Stops there for sometime, then come down where the programme of meal is kept. The navas is fulfilled except Monday and Amavashya.

The above details taken from article Written by Mr. Prakash Jagdevrao Yadav - Harani.

i like it.thank you boss for doing this . when u come to shinganapur ask me there my name is Rahul badave .

excellent work u have done .......can u upload picture of shivling which is unique?also if possible upload pictures of lord bali temple......thank u...

excellent work u have done .......can u upload picture of shivling which is unique?also if possible upload pictures of lord bali temple......thank u...

thanks santosh.. when i get those pictures of shivling and lord bali i shall upload them

thanxz man....4 posting all d details..n also if u can get some more detail over it do kindly post it..!!

This is the where our family god Mahadev staying,Thanks lot for the information

Thanks lot for the information