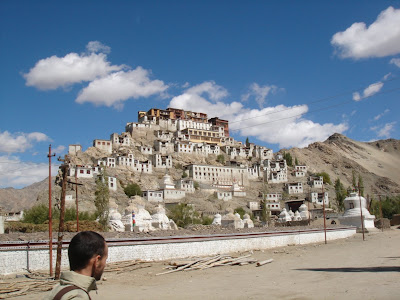 Situated at an altitude of 3600 m above sea level, the monastery of Tiksey is situated about 20 km far from the town of Leh and ranks among the most important monasteries in Ladakh.

It is believed that in the early 15th century, Tsongkhapa, the founder of the reformed Gelug School, sent six of his disciples to remote regions of Tibet to spread the teachings of the new school. One of these six was known as Sherab Sangpo. He went to Ladakh and was the founder of a small monastery at the end of a valley in the village called Stagmo. Palden Sangpo, Sherab's disciple carried on with the work of his teacher and he was the one who founded the Thiksey monastery a few miles away from Stagmo near the River Indus on a sacred hill above a village of the same name.

It is the seat of Tiksey Rinpoche, the main leader of the Gelug School in Ladakh and is the main and leading monastery for more than ten other famous Ladakhi monasteries such as Diskit, Spituk, Likir, and Stok.

Housing one of the largest Buddhist statues, the 15 metre tall Champa, the Buddha of Future and located strategically, today, Thiksey is one of the most frequently visited and most photogenic monasteries in Ladakh. About a hundred monks live here. Ngawang Champa Tenzin, born in 1943, places a great emphasis on preservation of the traditional ways of running the monastery and continues to teach both monks and lay villagers. A former member of Indian Parliament, he has helped greatly towards establishing the village school called Lamsang, which is one of the prestigious Ladakhi Lamdon schools. Thiksey is one of the finest examples of Ladakhi architecture.

This Gompa is situated on the top of the hill and forms part of Gelukpa order. The 12-storey monastery complex contains numerous stupas, statues, thankas, wall paintings, swords and a large pillar engraved with the Buddha's teachings apart from the sacred shrines and other precious objects to be seen.