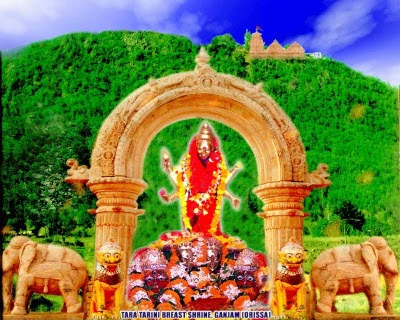 It is situated on Taratirini hill near Purushottampur which is at a distance of 40 km. from Berhampur in Orissa. The Tara-Tarini Hill ,a part of the Kumari Hills on the blanks of Rushikulya river.

According to the Mythological Puranas the origin of Maa Taratarini is directly attributed to Daksha Prajapati’s Jagna in Satya Yuga. The famous Shakta Peethas of Bimala, Tara-Tarini, Dakshina Kalika and Kamakshi originated from the limbs of the divine Corpse of Devi Sati. Mythological sacred texts like the Shiva Purana, the Kalika Purana, the Devi Bhagabat (a contemporary text of the Mahabharata written by Shri Vyasa Dev around 6000 years ago) attest this fact.

According to the texts of Mahayana Buddhists, in the initial days, the Buddhists didn’t believe in the worship of Goddesses or in Pratimapuja (Idol Worship). But, the ecclesiastical texts of Mahayana’s reveal that from 1st century AD after the fall of Kalinga, for the first time the Mahayana Buddhists accepted the worship of Mother Goddess ‘Tara’. So there is seldom any doubt that the Buddhists have learned the ‘Tara’ Puja concept from this Shrine. The Bouddha Tantrik texts, texts of Vajrajani sect and Hindu Tantrik texts also attest these facts. Scholars believe that in the primary days the Buddhists worshiped Taratarini, the principal seat of Tantrik sect in Hinduism at that time, as Bouddha Tara, and later on included ‘Tara’ as the Tantrik deity or spouse of bodhisattva Avalokiteshvara in their belief system. Gradually this ‘Tara’ worship spread to different parts of the world.

the primordial deity of the Mahayana Buddhist sect at Tara-Tarini Hill and Tara-Tarini as a famous Buddhist Tantra Pitha.

According to folk lore, it is around 8th Century AD when Jagadguru Sankaracharya toured the whole country, that he discovered this Shrine. But, it did not exist in its present form. After long try he came to know that this ancient Shakti centre was under the control of Buddhist tantrikas. Then he released this Peetha from the control of Bouddha tantrikas and handed it over to Hindus.

It is known from the available sources that till 17th century this place was out of the sight of the common man. But, according to a folk story once Maa Taratarini appeared as two sisters in the house of Shri Basu Praharaj. He was a learned Brahmin of Kharida Vira Jagannathpur village in Ganjam District and one of the great devotees of the Mother Goddess but child less. After staying for some years one day both the sisters disappeared suddenly from the house of Basu Praharaj and according to the account of the villagers both the sisters traveled up to the Tarini Parvat/ Ratnagiri and disappeared there.

On that night he saw a dream where the Goddesses Tara and Tarini informed Basu Praharaj that actually they were not his daughters; but they are the Adi Shakti, Goddesses Tara and Tarini. The Goddesses ordered Basu to come out of the grief and said that the time has arrived and with full devotion renovate the temple on the Hill Top of Tarini Parvat and establish the deities according to the Vedic tradition.

The Twin Goddesses Tara and Tarini are worshiped as manifestations of Adi Shakti. The Taratarini Hill Shrine is one of the oldest pilgrimage centers of Mother Goddess and is one amongst the four major ancient Shakti Peethas in India.

The height of the hill is approximately 708ft. The picturesque scenery of the temple, from the hilltop down to the bank of river Rushikulya provides immense pleasure and a thrilling experience of nature and divinity to each pilgrim and often captivates the heart and soul. There are 999 steps on the front side of the hill leading to the temple and also a pucca road for vehicles behind the hill facilitating devotees to reach the Pitha. Provisions of electricity, drinking water and a small market complex at the site with articles of puja /archana are additional features of this Pitha.

The mythological texts recognize four major Shakti Peethas,i.e. Tara Tarini (Stana Khanda)near Berhampur, Bimala (Pada Khanda) inside the [[Jagannath Temple (Puri),Kamakshi (Yoni khanda) near Guwahati and Dakhina Kalika (Mukha khanda) in Kolkata among the 4 Adi Shakti Peeths. Apart from these, there are other 52 other sacred Shakti Peethas, which originated from the limbs of the corpse of Mata Sati in the Satya Yuga.

So, there is absolutely no dispute regarding these four famous Adi Peethas. Apart from these four there are 52 other famous Peethas recognised by religious Texts. According to the Pithanirnaya Tantra the 52 peethas are scattered all over India, Sri Lanka, Bangladesh, Nepal, Tibet and Pakistan. The Shivacharita besides listing 52 maha-peethas, speaks about 26 more upa-peethas. The Bengali almanac, Vishuddha Siddhanta Panjika too describes the 52 peethas.

1. The Sankranti Mela: Every month on Sankranti day. This festival is observed on each Sankranti day of the Hindu month. This day is considered to be very auspicious for Tantra Sadhakas. The important features of the festival are as follows:
(a) The temple opens for Darshan of the deities from 5.30 AM till 10.00 PM without Pahada during the day.
(b) Baja Pratima (Chalnti Pratima) of the deities are put on the Bije Pithastal located near the temple gate.
(c) Puja and offerings to the deities are offered to the Bije Pratima as no offerings are allowed within the Garbha Griha during this occasion. However the devotes can contain the darshan of the deties in the Garbha Griha.
(d) Megha Snana, Chandipatha and Homa are the special activities conducted in the Grabha Griha and the side pedestal of the Garbha Griha by the temple Purohit.
(e) Special Khechudi Bhoga is supplied to the devotees on receipt per packet. This Bhoga is prepared and sold by the Temple Trust.

3. Chaitra Parba: One each Tuesday on the month of chaitra i.e.during March/April as per Calendar.

This festival is the most significant amongst all, celebrated at the Tara Tarini Pitha. It is observed during each Tuesday of the month of Chaitra. Significant features of the festival are as follows;
(a) The temple remains open for the Darshan of the deities from 5 AM till 11 PM. Pahada of the deities is confined to night time only.
(b) Devotees in large numbers congregate at the up-hill and downhill temple complex from Monday night.
(c) 2nd & 3rd Tuesday of the Chaitra is considered to be most auspicious days. Therefore large numbers of devotees congregate during these days.
(d) Puja and offering by the devotees are offered to the Chalanti Pratima of deities placed at the Bije Pitha for the Bije Pratima. However Darshan of the deities in Garbha Griha is allowed.
(e) Special arrangements for hair offering are made. 250 barbers at the top hill and 500 barbers at the down hill at the barber shed are engaged to help their hair offering of their children and other devotees. Hair offering continues from mid-night on Monday till 6 PM of Tuesday.
(f) Special Khechudi Bhoga is supplied to the devotees from Monday mid-night till 6 PM of Tuesday evening.
4. Basantika Parba: During the month chaitra i.e. March / April.
5. Chitalagi Amabasya i.e. Srabana Amabasya during July / August.
6. Gamha Purnima (Shrabana Purnima ) during July /August.
7. Saptapuri Amabasya during the month of Bhadraba during August.
8. Saradiya Parba on the month of Ashwina Mulastami to Dushara during September / October .
9. Dipabali or Shyamakali Puja: on Kartika Amabasya during Sept /Nov.