Palitana is a religious Jain city, Bhavnagar district in the Indian state of Gujarat. It is located 50 km South-West of Bhavnagar city and is a major pilgrimage centre for Jains.

Some people call the following encounters myths some give facts and some believes them which lives in the heart of every follower of Jainism.

* 1. The moolnayak murti-Lord Adinath's idol breathed 7 times, when it was first placed over there.
* 2. A layer of silver gets accumalated on idol every night and that serve as the priest's fees rather gift from god.
* 3. A small idol of Lord Suparshvanath Swami around 10" used to fly everynight from one of near by temple to Lord Adinath`s Palm.
* 4. There is only and only one tree in the entire Temple Campus below which it is believed to hide the jewels, pearls, relics and other ornaments of time before humans.

The town is considered by many Jains to be more important than the temple covered hills of Jharkhand, Mt Abu and Girnar. Palitana was the capital of a princely state of the Gohil Rajput clan. It is also one of the greatest tourist attractions in Gujarat for foreign tourists. Every year millions of people come to visit these temples. Palitana is the place where millions and millions of Jain sadhu and muni got salvation. For the Svetambar Jains Shetrunjay is the earliest and, next to Sammet Shikhar in Bihar, the most sacred mountain.

There are hundreds of other temples (besides those on the Shatrunjaya hills). Guest houses (dharmashalas) are found in Palitana city. It is believed that every Jain should visit Palitana at least once in his lifetime to get "Bhavya" status (fit to attain nirvan or salvation).

The Palitana temples are considered the most sacred pilgrimage place (tirtha) by the Jain community. There are more than 1250 temples located on the Shatrunjaya hills.

The main temple on top of the hill, is dedicated to 1st tirthankar lord Adinath (Rishabdeva). On the top the Shatrunjai Hill is a cluster of Jain temples ( 873temples ), built by generations of Jains over a period of 900 years, from the 11th century onwards. However, destroyed by the Muslim invasions in 14th and 15th centuries, the temples were built anew in 1500. The temples are managed by the Anandji Kalyanji Trust of the Kasturbai Lalbhai group. From the foot of the hill to the top there are 3,800 and odd stone steps cut to facilitate climbing. 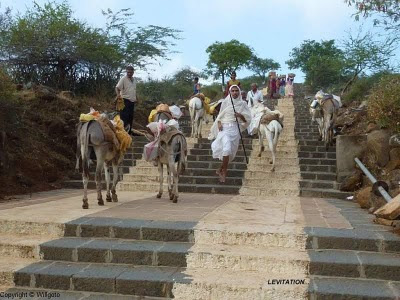 No one is allowed to sleep overnight including the priest, because the temple city has been built as an abode for the Gods. A recently concluded count reveals that there are a total of more than 27,000 idols of jain god on this mountain alone.

Not only temples, Shatrunjay Hill also offers a beautiful view of the surrounding scenery. From here you can also see the biggest irrigation project in Saurashtra. The waters of the flowing Shatrunjay river are said to confer merit in the bather as well as cure various diseases.

For pilgrims visiting of foot there are three circumambulatory routes. The shortest leads round the temples along the outer wall; the other follows the foot of the mountain. The third, about forty kilometres long, frequents en route five temple sites where pilgrims may stay overnight before continuing their holy walk. The major event of the year takes place on the day of the full moon in the month of Phalgun (Feb./March) when some ten thousands of pilgrims go round the Shetrunjay hill, the 'Lord of Peaks'.