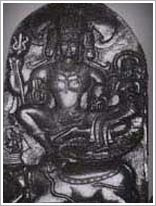 The town of CHANHANI, located in the western part of the Jammu holds special significance as it houses a great piece of art - the Sacred Temple of Sudhmahadev. This holy spot near Patnitop is situated at an altitude of 1225 mtrs., about 120 kms. from Jammu. It is situated at a distance of 8 kms. from Khud.

A popular legend is associated with the Shrine. It is believed that Lord Shiva who was in his samadhi shot his big trishul to protect his consort Uma whose loud cry shook Shiva out of his meditation. Infact Shiva's devotee, Sudheet approached Uma to pay his respectful obeisance. Since he was a demon in his previous birth according to the legend, his demonaic looks frightened her and she made a loud shriek. The trident which Lord Shiva had flung hit Sudheet. Shiva realised his mistake and he offered to resuscitate him. But Sudheet felt that there could be no better life than death given by Lord Shiva Himself. Lord Shiva then gave his command that Sudheet's name will be prefixed to his name at that place. Since then it is called Sudh Mahadev. The broken trident in three pieces, is installed in the temple.

The trident housed within the temple,belonged to Shiva who killed demon there. The temple has a black marble self made 'lingam' and Goddess parvati mounted on Nandi. It has a 'Dhooni'(sacred fire) to commemmorate the spiritual attainments of Baba Roop Nath who is said to have attained Jeeva Samadhi there. It is said that the Dhooni has been kept burning constantly ever since Baba Roop Nath is said to be residing in the temple.

Chaudhari Ramdas of Chanhani and his son Chaudhari Parag Mahajan constructed the temple about 80 years ago. Shri Masu Shahane of Sudhmahadev did the construction of the entrance door of the temple of Sudhmahadev. The shrine is visited pilgrims on the full moon night of 'Sawan' (July-August) to worship the "Trishul' (trident) and a mace which is said to belong to Lord Shiva. The Devak stream originates at Sudh Mahadev and disappears among the rocks a few kilometres down strean. Thousands of pilgrims visit the temple especially during 3-day fair held on the occasion of Jestha Purnima during july-August.

Gauri Kund, also 5-km distant, is a small cave associated with Goddess Parvati. Sculptures from Hindu Mythology can be seen at the Pap Nashni Bauli springs. Shiv Garh is the highest mountains in the area. During Chaudash, the pilgrimage to Gauri Kund, situated 2.5 kms from Sudhmahadev on the banks of Dewak Nadi, is considered to be most sacred. Here in the lap of the mountains, lies the Temple of Uma & Shankar. After taking a bath in the Dewak Nadi, the pilgrims worship Lord Shiva and Parvati in the Temple. After worshipping Gauri Kund, the pilgrims go to Gaukaran, about 0.5Kms from Sudhmahadev. Then they climb up another 2 Kms of mountaineous area to reach another sacred place ‘Nada’. In Sudhmahadev, there is a small stream called ‘Mitra vavli’ or ‘Papnashi Vavli’. It is believed that taking bath in it relieves a devotee of all sins.

Festivals :
Though one can undertake this pilgrimage to Sudhmahadev all the year round, but as per religious traditions, the days that are considered most auspicious are Maghar Chaudash, Chaitra Chaudash, Rath Yatra, Baisakhi and Shivaratri.

Another 8 kms from Sudhmahadev is an enchanting hill resort of Mantalai. Located at the top of a hill and surrounded by tall Deodar trees giving fresh and cool air. It is believed that Lord Shiva and Goddess Parvati got married there. There is a Shiva temple with a pond by its side.